We are thinking of temporarily ‘closing’ BH Journalists’ office 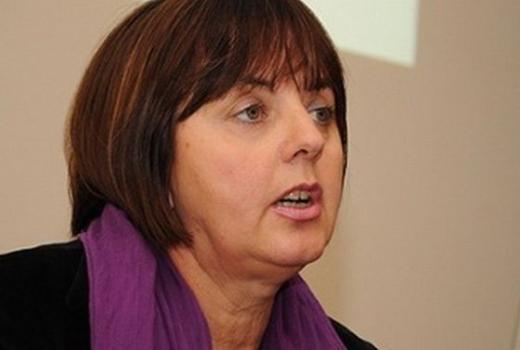 We are thinking of temporarily ‘closing’ BH Journalists’ office

On the occasion of the 20th founding anniversary of the Independent Union of Professional Journalists, today BH Journalists’ Association (BHN), we interviewed Borka Rudić, the Association’s general secretary.

What is BH Journalists’ Association today? How many members does it have and from which media do they come?
BH Journalists have a little over 750 members from all parts of BiH and from all types of media. Of the total number, around two-thirds are active members in terms of participating in our activities, creating strategies and work programs, reacting when they have a problem or want to change something in the Association’s work. In the last four years we developed a network of BHN Journalist Clubs in nine cities and they deal with journalists’ problems in local communities. Members of the BHN Journalist Club in Banja Luka are presently the most active and loudest. We might say we are the only journalist association in BiH which continuously, devotedly and courageously works on public advocacy for journalists’ rights, particularly in cases of their violation or political pressure.

Who is the average journalist in BiH today? What school has he or she finished? How old is he or she? We do not have an analysis at the Association for all of BiH and all media, but only for our members. Eight years ago we carried out preparations for a long-term strategy and when we analyzed our membership we established that the average member of BH Journalists is 33 years old, has a university education (usually in journalism) and works for a broadcaster. We are now preparing to make a new strategy and a new analysis of membership. It will be interesting to see who the average member of BH Journalists is and what they are like.

What key issues is today’s Association working on?
There are five topics or areas on which BHN’s work is based. The first one is protection of the right to freedom of expression and rights ensuing from employment through the Free Media Help Line, a unique service of its kind in our region and all of Europe. FMHL’s legal team annually processes around 50 different cases of violations of journalists’ rights – from physical attacks, death threats, mobbing, denial of salary, work off the books, to defamation. Then there is also education of journalists and journalism students, media content analysis, surveys and professional debates of importance to promoting the quality of journalism, and advocacy and lobbying activities for development of the media landscape in BiH. We also have a Solidarity Fund for symbolic financial assistance to our members.
How has the media situation changed since the Association’s founding to date?
A lot. In these 20 years, BiH journalism and media have gone through different phases: from postwar enthusiasm and a desire to advance the legal framework and professional standards, through the founding of a large number of media outlets and media organizations with the support of the international community, to breaking down entity lines and uniting journalists from both BiH entities, and then again to fragmentation and divisions within the profession… All these processes are a result of political interference in media and total subjugation to the interests of politics, and often also to national interests and interests of capital. They are also a consequence of confusing, ignorant and at times meaningless strategies imposed by the international community, which at this moment does not even know what actually to do with the media in BiH. 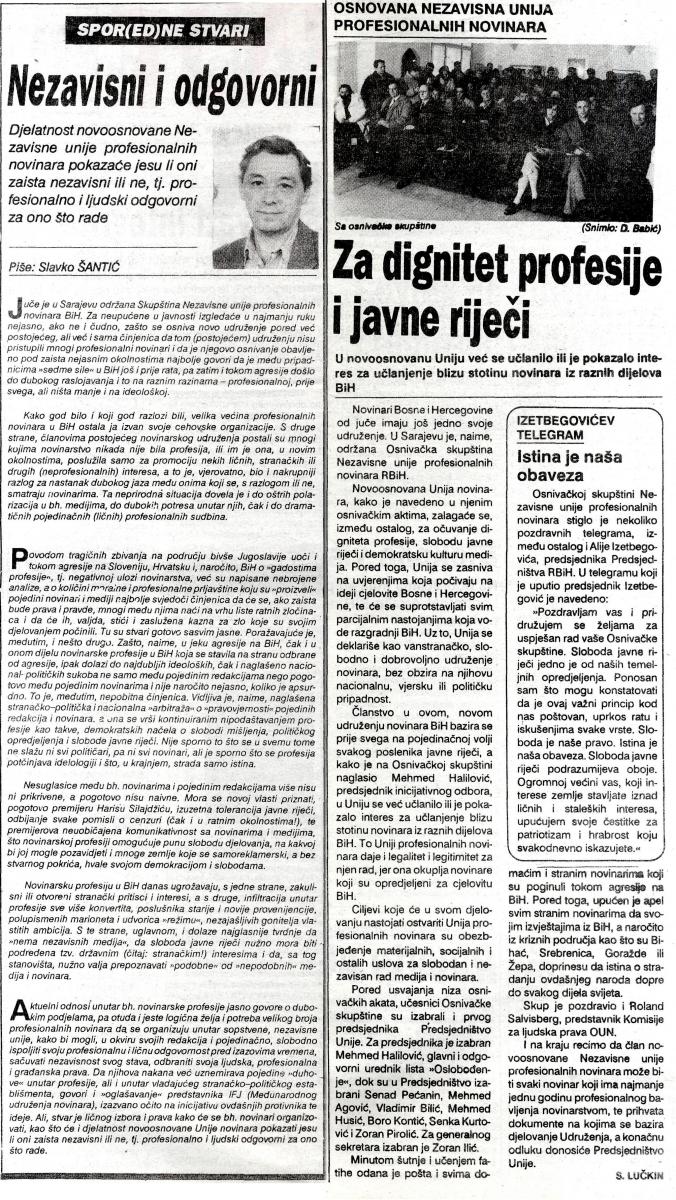 Photo: Independent Union of Professional Journalists in 1994 (click to expand)

What are the most important changes?
For me the most important changes are the ones that occurred in the legislative framework –decriminalization of defamation and free access to information paved the way for democratization of the public scene and crushing taboos on untouchable institutions and individuals in government. Unfortunately, practice in implementing the two laws from this field is far from the goals with which they were passed, and even far from the practice of the Human Rights Court in Strasbourg. A second important change are online media, news portals and media platforms which brought into our public space an entirely new type of journalism (some like to say ‘instant’ journalism) which offers citizens an abundance of information and an alternative approach to presenting news and key events.
Is political or economic pressure on media more dangerous for local journalists?
In BiH, as in numerous other countries, political and economic pressure is intertwined – one precedes the other or they are together due to the connection of politics with public companies and private capital… Examples of calling on companies not to pay for advertisements or commercials in a particular media outlet after the outlet criticized the policy or actions of one of the leaders are not rare… What is particularly pronounced and dangerous for journalism lately is pressure by media owners (connected with politics and companies) on journalists and editors, economic blackmailing of journalists or absolute exploitation as in the darkest time of industrial capitalism.
Who is your greatest support? Local or international institutions?
BH Journalists have the greatest support in their members. Local institutions not only do not help us; we are a disturbing factor for them. They do not accept our invitations or meetings, they do not help us in any way, and they hamper us wherever they can! BH Journalists received a grant from a public budget only twice and funding for employment of unemployed journalists also twice. In the last ten years, a total of 20,000 marks.
Only some of the international organizations operating in BiH are deserving for the survival of BH Journalists, such as Council of Europe, CRD, OSCE, US Embassy in BiH, earlier Press Now, embassies of Norway and Holland... Some of them behave even worse than our government; they are more sensitive to criticism or remarks related to their media policy; they put you on a ‘black list’ right away if you do not say what they like to hear… There is also prejudice on their part due to the fact that the seat of the Association is in Sarajevo and many thus say that we are a ‘Muslim association’ and exclude us because of that from their activities, support… We almost had a scandal at a conference organized in 2013 in Sarajevo when an official from one of the embassies asked us to point out to him in the conference room ‘the Serbs who came to the conference’!?
These days we have seriously been thinking about a temporary and short-term ‘closure’ of the office of BH Journalists as a sign of protest against the policy of a number of international organizations in BiH toward BH Journalists, other media organizations, and in particular media which have not received quality support from international organizations since 2006.