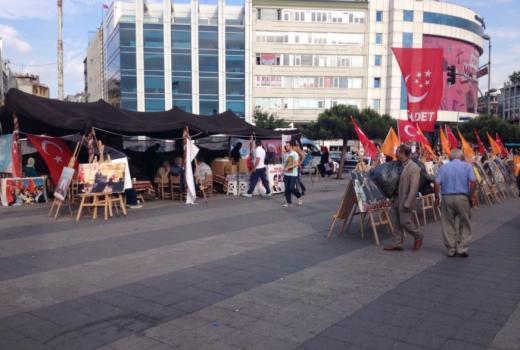 Liberté, égalité, fraternité; (liberty, equality, fraternity) is the famous French ‘hendiatris’ that seems to be misinterpreted by Turkish counterparts as ’veni, vidi, vici’ (I came; I saw; I conquered). However, those fundamental terms of modern democracies still occupy some space in the Turkish constitution for example in Article 67.

“Elections and referenda shall be held under the direction and supervision of the judiciary, in accordance with the principles of free, equal, secret, direct, universal suffrage, and public counting of the votes.”

Even though ‘free and equal’ constitutes a good portion of the legal framework like in the 67th article, the barrier between the practice (of law) and the law is quite thick in Turkey.  The barrier’s name is “indivisible integrity of the State with its territory and nation”. It is by far the most open-ended term in the constitution. As a result it has been instrumentalized by many different political actors in Turkey throughout the history of the republic in order to limit freedom of speech and press freedom. The ruling party AKP (Justice and Development Party) didn’t really miss that chance (!) before the snap elections held in on November 1.

The Organization for Security and Cooperation in Europe (OSCE) report released after the snap elections mentions something similar:

“The Constitution and the legal framework do not sufficiently guarantee freedom of expression. In particular, unclear provisions in the Anti-Terrorism Law and Press Law, and criminal provisions on insult of the president were excessively applied during the election period.”

Turkey had its snap elections on November 1, after none of the political parties were able to form a coalition government according to the June 7 election results. AKP came up as the first party with 49.5 percent, CHP (Republican People’s Party) followed with 25.3 percent and MHP (Nationalist Movement Party) and HDP (People’s Democratic Party) followed with 11.9 and 10.8 percent respectively.

First of all, these snap elections took place under extra ordinary circumstances. Turkey witnessed two deadly attacks; with the one in Ankara that took 100 souls as the deadliest in Turkey’s history. The conflict between Turkey and the PKK (Kurdistan Workers’ Party) started again, curfews were declared in some of Southeastern districts, and HDP’s offices were targeted. So, it is important to be aware that ‘existential uncertainty’ was the main theme of the snap elections.

Many discussed the effects of that exceptional atmosphere to the election. ‘The opposition’ should have analyzed the atmosphere before the elections not after the elections! However, taking a look at AKP’s successful, not necessarily democratic and fair handling of ‘mediapolis’ is far more interesting for me. Understanding the convergence between ‘the indivisible integrity of the State’ and ‘the indivisible integrity of AKP’ when it comes to freedom of speech and media is crucial for being able to reflect on Turkey’s perfunctory democracy.

The exceptional atmosphere that preceded the election started after 30 people were killed by a suicide bomb attack on July 20, in Suruç, a border town 10 km away from Kobani (Ayn-El-Arab). It is claimed that ISIL was responsible for the attack. The perpetrator was a Kurdish man from Adıyaman, who is believed to be an ISIL militant.  He was identified through his ID that was later found at the scene of the attack.

ISIL didn’t claim responsibility for the attack publicly. In the heat of the event, HDP co-chair Demirtaş blamed the Palace Gladio for the deed (referring to President Erdoğan and his so-called support of ISIL), which I find absurd, not because it is not true but because a politician should be able to develop less of an ideological and more of a precise and fact-related discussion. But politics are rarely rational in Turkey. Reporting ban followed and the investigation is still confidential. Erdoğan’s and AKP’s answer were harsh. Due to the media ban of the event the public was not able to access information on the event and mainstream media mostly covered the reactions to the event. Far away from a productive deliberation reactions were very mostly polarized between ‘AKP supports ISIL’ and ‘HDP should call PKK a terrorist organization’.

Well, it is not wrong to say that when deliberation ends there is always room for violence. On July 22, two police officers were killed by PKK in their beds. PKK claimed responsibility for the attack the same day and called it ‘retaliation for Suruç’. Interestingly, they denied their direct involvement after five days by saying it was done by a regional group. It was indeed a confusing, maybe even controversial event for the ones who remember the dark days of 90s in the region with its similarity to the death of 38 people on May 24, 1993 that ended the cease-fire at that time. Thus, Davutoğlu proclaimed the ‘war on terror’, both against PKK and ISIL, after the event.

So the ‘war on terror’ began. Turkish jets started to bomb the Qandil Mountain where the PKK headquarters is located. Police raided many locations in the major cities and detained many PKK members/sympathizers and scores of ISIL militants.

Davutoğlu said in his ‘war on terror’ statement “the Turkish government assessed a combined action against Turkish democracy that tested the power of the government following the June 7 election, similar to those of 2007 and 2011. The government had to take action to maintain public order to protect democracy and freedoms.” It is a solid statement except the fact that according to the June 7 election results his government’s legitimacy was open to discussion since the AKP had lost the majority and coalition talks were still going on. It is not only morally but also lawfully not right to discuss start a war against terrorism if a state has recently been through an election and the result points out a coalition government. At least, that’s how democracies should function. Secondly, it is ironic that public order was even more disturbed following his statement.

In short, the hell broke loose after July. Many civilians, Turkish soldiers and Kurdish militants lost their lives. A circle of violence started that reached its peak at the October 10, with the suicide attack in Ankara that killed 100 people, which was of course followed by a reporting ban. AKP was represented in the ‘mediapolis’ with more security promises and supported its argument in equalizing HDP and PKK with additional nationalist rhetoric. HDP was mostly defensive and not productive. CHP did nothing. MHP did something by only saying NO to every possible coalition formula.

At this point the convergence of AKP and state can be observed at least through and in the media. AKP is represented as the sole owner and protector of the Turkish state in the media. The representational value was also stringed by the quantitative value. According to OSCE report “The AKP received the highest amount of coverage on all television stations - 73 percent on TRT1, 77 percent on ATV, 32 percent on CNN Turk, 49 percent on Haber Turk and 47 percent on Samanyolu TV, while the other parliamentary parties received less coverage. The tone of the coverage of the AKP was mostly positive on the TRT1, ATV and Haber Turk, and mostly negative on CNN Turk and Samanyolu TV. The CHP, MHP and HDP respectively received 12, 8 and 6 percent on TRT1; 11, 8 and 4 percent on ATV; 28, 18 and 14 percent on CNN Turk; 19, 22 and 9 percent on Haber Turk, and 23, 13 and 12 percent on Samanyolu TV. Four other parties received coverage below one percent, and the remaining parties were not mentioned on the monitored television stations.”

In addition to the total domination of AKP in mainstream media, a group of gangs, the so called ‘AKP supporters’ - accompanied by AKP Istanbul representative Abdurrahim Boynukalin - attacked the Doğan Media Center where the Hurriyet newspaper, one of the most circulated newspapers in Turkey, is located. Ahmet Hakan, a Hurriyet column writer, was attacked in front of his house. Many further attacks and prosecutions of journalists followed during the election period. I will go back to OSCE report:

“A ban on reporting on any matter related to the investigation of the Ankara bombing, de facto criminalized reporting on issues of public concern. Journalists reported to IEOM observers that cases of violence against them and attacks on media outlets has resulted in an increase of self-censorship. The media landscape comprises a variety of outlets, many of which are politicized. Media owners’ business interests in obtaining public tenders and state advertising led to interference into editorial autonomy and resulted in limited criticism of the government, in particular on television“.

Liberty and equality looks good on paper but in Turkey’s political sphere at the end of the day it is all about conquest and victory even though it costs many lives.

Press freedom in Turkey: The case of Mohammed Rasool
Arrests are nothing unexpected