Discussion on new set of laws: Tegeltija tells journalists not to resist 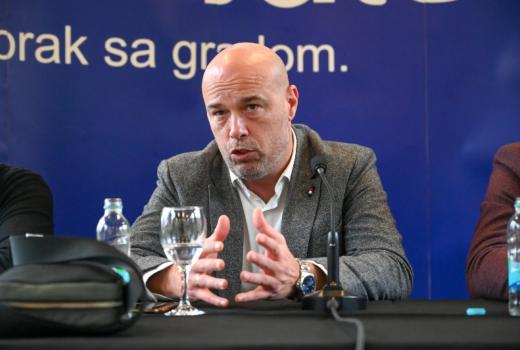 Discussion on new set of laws: Tegeltija tells journalists not to resist

The majority of the media community in the Republika Srpska (RS) sees a proposal of a new set of laws in the field of preventing the spread of fake news and hate speech, as well as criminalization of defamation, whose adoption was announced by the new entity President Milorad Dodik, as a threat to freedom of speech, critical thought and media that do not report according to the incumbent government’s preferences. They said this in Banjaluka during a discussion organized by the Banjaluka.net portal on Wednesday.

During the discussion, Tegeltija said that he believes that criminalization of defamation will be adopted and recommended that journalists participate in the creation of this legislative solution instead of resisting it. He said that, as far as he knows, there is still no draft law.

"A law related to preventing the spread of fake news and preventing hate speech will have a greater effect on society than criminalization of defamation. In Serbia, defamation is an integral part of the Criminal Code. I don't see journalists being imprisoned. No one has reason to fear. I think that every journalist who does their job honorably and honestly should be happy about these laws, because they will be able to separate those journalists who are doing their job from those journalists who deliberately disseminate lies. We put a lot of people, especially those who are exposed in the public space, in a situation where they are blackmailed and extorted by journalists. Quasi-journalists. We have exposed the citizens of the RS to the possibility of such blackmail, without any possibility of protection", said Tegeltija, emphasizing that he is not participating in this initiative on assignment, but because he deeply believes in it.

"We are talking about suppressing lies in the public space. And lies are harmful. I don't see that anyone will be persecuted. I understand the fears, but they are unfounded. We must fully organize the public space, to protect it from fake news and lies in general. Knowingly planned lies exist", said Tegeltija in his presentation.

He believes that decriminalization of defamation, which happened almost 20 years ago, has not given the desired effects; instead "an Eldorado of fake news, hate speech and lies" has appeared. He shifted the burden for that to the journalistic community.

"The journalistic community has failed to self-regulate the journalistic profession in the period from the decriminalization of defamation until today. If there had been more self-regulation, we wouldn’t now be in a situation of having to regulate it in a different way," says Tegeltija.

Siniša Vukelić, member of the Steering Board of the BH Journalists Association and editor of the Capital portal, believes that this is a matter of creating a legislative framework for stifling freedom of speech in the RS, as well as the government’s desire to deal with the remaining media that it does not like and that are not under its control.

"Everyone should be concerned, not only journalists. Citizens, academicians, non-governmental organizations, the opposition, anyone who disagrees with the authorities in the RS. Tegeltija says that no one has been arrested in Serbia. Ana Lalić was arrested during the pandemic because she informed the public that there was no equipment to fight the corona virus at a clinical center, which was true. Arrested for 48 hours. Completely accurate news. You don't have to put journalists in prison for a month or two or 15 years. It’s enough to arrest them for 48 hours. And then another journalist again in the same newsroom. You thus establish self-censorship where there will be no one to do this work", recalled Vukelić a case from neighboring Serbia.

Instead of these laws being introduced, Vukelić proposes the introduction of the media ombudsman institution, as well as a number of other laws that can help the media. Such as a law on transparent media ownership, treating attacks on journalists as attacks on officials or creating a fund for media pluralism.

"All real journalists are against spreading fake news. It’s known who does that. Who wrote lies about Vladimir Kovačević on RTRS and ATV? Let's call a spade a spade. From the anonymous portals which the public services insert into the public space, and which only appeared an hour earlier. We are all against that. With such weak institutions and at this level of democratic development, this kind of tool... It’s actually an assassination of journalists. Journalism is not a crime and can’t be treated as such," said Vukelić resolutely.

Who will determine what is lie?

When asked by the present journalists and representatives of non-governmental organizations whether he can guarantee that no journalist will go to prison for criticism, Milorad Dodik's advisor Milan Tegeltija answered in the affirmative.

"A value judgement is one thing, a lie is another. Defamation is not criticism. No one will go to jail for criticism. A mistake and misinformation are not defamation. A conscious lie is. There is fear, not of the law but of its implementation. All laws can be abused, we must do everything to prevent that from happening. But we can’t prevent a law being passed because we are afraid that someone will abuse it," said Tegeltija.

In his presentation, Tegeltija often referred to honor and dignity and he asked journalists to think from the point of view of the people they report on.

He said that Milorad Dodik will not stop at passing the announced set of laws and that laws related to internet violence are also planned.

"Let's call a spade a spade. You talk about the dignity of politicians who are the target of criticism, while journalists are often the only allies of citizens. How will it be determined, who and based on what criteria will determine what is a lie? We can't help but be worried and think that something is hiding behind all this. All this in a package is a big danger", commented the president of the Helsinki Citizens’ Parliament, Dragana Dardić.

The editor of the Banjaluka.net portal, Aleksandar Stojanović, believes that journalists are rightly afraid of the judiciary, because the new laws give them a serious tool and the task to interpret what is true.

"It’s hypocritical that we refer to the practice of the EU; these countries have banned Russian media, only because they come from Russia. Everyone rebelled against that in the RS and then they get into a situation where they say that this is European practice. This selectivity in the implementation of European practice is hypocritical and is becoming ridiculous. They rebelled against Inzko's law, not because of the subject matter, but because it restricts freedom of speech. Now these same people are regulating freedom of speech. That is hypocrisy and selectivity in the interpretation of European practice and we are justified in fearing that these laws are being proposed with some other goal in mind," said Stojanović.

Branimir Đuričić from the Association of Journalists of the Republika Srpska and RTRS journalist announced his support for the adoption of these laws, if "Inzko’s law" is not withdrawn, as he calls the amendments to the Criminal Code of Bosnia and Herzegovina, (B&H), which prohibit the denial of genocide and other war crimes and which were imposed by former High Representative Valentin Inzko. According to these amendments, it is prohibited to publicly deny and grossly minimize the crime of genocide, crimes against humanity and war crimes directed against a group of persons or a member of a certain group with regard to race, skin color, religion, origin or national or ethnic background, in a way that could incite violence or hatred directed against such a group of persons or a member of such a group.

"I must point out that we must all fight together against Inzko's decision and point out the fact that our freedom of speech has been restricted. Most of my friends and colleagues from the Association of Journalists of the RS are under investigation, where they are threatened with a sentence of three to six years for commenting on a verdict of the Hague Tribunal. If I face a sentence of 3-6 years for commenting on a court verdict, why should I be concerned about a law like this, which will surely be more lenient?" asked Đuričić.

He calls the fight against the announced laws, in case the Law on the Prohibition of Genocide Denial is not withdrawn, selective justice. In the new set of laws, he even sees an opportunity for protection of journalists.

"Maybe this law is good for journalists, maybe it will defend me when someone calls me a mercenary, says that someone is sending me questions from the president's office, that I am a domestic traitor... Maybe that's how I will defend myself from my colleagues and even from the one who initiated such a law. We are in favor of a principled fight for media freedom or we will not fight at all. Either all or nothing. In principle, we are against this change, but if Inzko's law remains, we will find a way to support even such a law", emphasized Đuričić.

The discussion was followed mostly by journalists and representatives of the non-governmental sector, who were of the consistent opinion that the announced laws must not be passed, because they directly threaten freedom of speech. As they say, they have no trust in the judiciary. They advise institutions to introduce media literacy as a compulsory subject in schools, to teach young people how to use the media and how to distinguish truth from lies and propaganda.

The Hadžifejzović Case: Threats of Rigorous Sanctions From the CRA
Dodik’s Proposed Laws: Whoever Says a Word Goes to Jail
Media trapped in post-election rhetoric in Republika Srpska