What the LGBTIQ Community Thinks about Bosnian and Herzegovinian Media Coverage 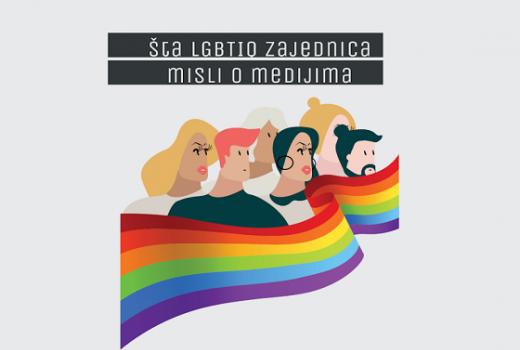 What the LGBTIQ Community Thinks about Bosnian and Herzegovinian Media Coverage

In the article titled “Media on the Pride Parade: After how many repeats does a lie become the truth?”, published on Media.ba on September 6th, we analyzed some of the news that the Bosnian and Herzegovinian media had published since the first Bosnian and Herzegovinian Pride Parade was announced on April 1st. Among it, as we established, misinformation and speculations were reported and sensationalism and one-sided stories dominated.

Such circumstances contribute to creating a sense of insecurity and fear within the LGBTIQ community and among those who support it. This was one of the conclusions of the analysis. To test this thesis, we created an online questionnaire for LGBTIQ activists and members of the LGBTIQ. Through the questionnaire, we wanted to test how they evaluate media coverage of LGBTIQ topics and whether isolated examples of media coverage affect their attitudes and life decisions. We also wanted to see if there was any interest in media literacy training within the community.

The questionnaire, which was created using Google Forms, was open from November 23rd to December 1st 2019. A total of 43 responses were collected from persons who identify as lesbian (14), gay (12), bisexual (11), intersex (1), queer (2) and other (3). Among them, 27 respondents identified themselves as female, 15 as male and one as different/intersex. Such a questionnaire does not allow an in-depth examination of attitudes and opinions and the questions are somewhat generalized. Nevertheless, despite its limitations, it provides insight into the perception of the role of the media in reporting on LGBTIQ topics that LGBTIQ persons in Bosnia and Herzegovina have and starting points for further research.

What the community thinks about the media

The views of persons who filled out the questionnaire and belong to the LGBTIQ community on general media coverage of LGBTIQ topics in Bosnia and Herzegovina are as follows:

9.3% agree with the statement that "the media in Bosnia and Herzegovina objectively report on LGBTIQ topics"; 55.8% of them neither agree nor disagree; and 34.9% disagree with this statement.

Among those who chose the answer "I disagree", some of the explanations for this choice are listed below (respondents' answers are neither linguistically nor stylistically edited – author’s note):

9.3% agree with the statement that "media reports on LGBTIQ topics are professional and un-biased"; 55.8% of them neither agree nor disagree; and 34.9% disagree with this statement.

Those who chose the "disagree" answer explained their choice as follows:

7% agree with the statement that “LGBTIQ persons in the Bosnian and Herzegovinian media are presented in an affirmative manner”; 62.8% of them neither agree nor disagree; and 30.2% disagree with this statement.

These are some of the explanations for the "disagree" answer:

33% agree with the statement that "the Bosnian and Herzegovinian media professionally reported on the first Bosnia and Herzegovina Pride Parade held in September this year"; 51% of them neither agree nor disagree; and 16% disagree with this statement.

Listed below are some clarifications of the answers of those who opted for "I disagree":

In addition to examining views on general media coverage, we were also interested in how the LGBTIQ community understands media content on LGBTIQ topics. To make a tentative assessment, in the questionnaire we included screenshots of headlines and/or sections of text extracted from three examples of media content on LGBTIQ topics published in Bosnian and Herzegovinian media. These examples, previously analyzed in the texts of Mediacentar Sarajevo and the Raskrinkavanje portal, contain misinformation and speculation and are written tendentiously. We asked the respondents to describe how they felt reading them, without the explanation given below.

These were the examples:

Without going into whether, and to what extent, they understand that the examples are sensational and tendentiously written, we asked the respondents what emotions the statements in these texts arouse in them. Some of the emotions listed are: anger, fear, anxiety, helplessness and sadness. Some respondents said that they did not feel emotions at all and some stated that the "facts" listed in Example no. 2 were "taken out of context" (such as the news of a possible ban on the Parade – see the explanation below).

In order to present the context of the news we selected and to reveal it, we will explain here in what way it is incorrect:

Example no. 1: On the Facebook page titled "Bosnian and Herzegovinian Police Academy", on April 1st this year (on the day the Pride Parade in Sarajevo was announced), a poll question was posted that read: "Should the police guard or detain LGBT people?". Numerous local and regional media, including Klix, reported the news of the publication of the poll by treating the Bosnian and Herzegovinian Police Academy website as the official site of the State Police Academy, that is, the police training institution.

Example no. 2: The text, published two weeks before the Pride Parade in Sarajevo, implies that the Parade may be banned, as some political parties have opposed its holding. The Raskrinkavanje portal analyzed the news, which was reported by the media in Bosnia and Herzegovina and the region, that the Cantonal Ministry of Internal Affairs (MUP KS) may decide to ban the public gathering.

The facts, however, are different. The MUP KS does not issue licenses for public meetings. A ban on public meetings is defined by legal assessments of the characteristics and goals of the meeting. Among them, the only possible reason that could have led to a ban on the holding of the Parade could have been an assessed threat of violence, that is, an attack on the Parade participants. The organizers of the Parade had been cooperating with the police forces since April to prevent this risk, and its holding had not been called into question, as all the conditions stipulated by the Law on Public Assembly of Sarajevo Canton for holding a peaceful rally were fulfilled.

Example no. 3: The day after the Parade, Source portal posted a Facebook status of Effendi Muhamed Velić, transmitting hate speech. This Facebook status, in which it is stated that the Pride Parade was "a disgrace to Sarajevo", was not accompanied by any critical remark, comment or condemnation of such a statement.

Source portal acted against journalist ethics and principles and ignored a report by the BH Journalists Association, which responded on August 31st to tendentious, uncritical and one-sided media coverage of the Parade. “It is particularly unacceptable to divert public attention from the key motive of organizing this event – based on the protected human rights of LGBTQ people and all other members of minority groups in Bosnia and Herzegovina – to reporting on counter protests, intolerance, dangers of this event for the values ​​of Bosnian and Herzegovinian society as a whole or for certain parts of it, as well as conjecturing who is for or against the Pride Parade”, the reaction states.

Unfortunately, through the online questionnaire we could not investigate the level of understanding of the media manipulation in these examples and this might be the subject of some future analysis. But the findings show that such media content evokes negative emotions among members of the community and work should be put into raising media and information literacy within the community, respectively into recognizing and understanding manipulation.

What are the media habits of the community

In societies where citizens are insufficiently media literate and where the issues that are reported about are sensitive, such as LGBTIQ rights issues, journalists are the ones who have to verify their sources and report carefully and responsibly. News such as, for example, that police forces are putting the issue of protecting LGBTIQ people on a referendum may be interpreted by right-wingers as encouragement to violence. On the other hand, the LGBTIQ community may lose trust in government institutions and feel discouraged to fight for their rights. And ultimately decide to leave Bosnia and Herzegovina.

In addition to working with the media, it is very important to work on raising the media and information literacy of the community itself so that it can better understand the news that is being marketed and its background. The fact that there is interest in such programs within the community is encouraging.

This article was made in cooperation with partners from the organization Schüler Helfen Leben from Berlin.