Cartooning Represents Freedom and It Should Not Be Limited 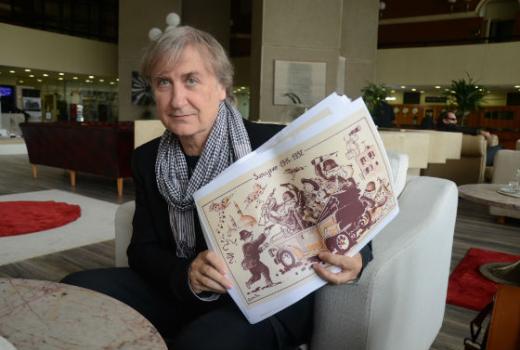 Cartooning Represents Freedom and It Should Not Be Limited

French cartoonist Plantu talked to Mediacentar about attacks against cartoonists in Europe, the drawings of Prophet Mohammad, the freedom of expression in the Middle East and the importance of a cartoon in political criticism and the development of dialogue and understanding for Muslims in the Western world.

A harsh political cartoon brought global reputation to the cartoonist well known as Plantu, but also endangered his everyday security. Two years ago, the police started escorting Plantu, and nowadays this cartoonist, who has been working for the French daily Le Monde for 43 years now, does not go anywhere without police protection. This was also the case in Sarajevo, in October last year, where he attended the celebration on the occasion of awarding the National Museum with Europa Nostra Award. He was born in Paris in 1951 and, as a 20-year-old, Plantu decided to take drawing lessons at the Saint Luc School in Brussels. The following year, in 1972, he joined the French daily Le Monde with his first cartoon on the war in Vietnam. In the '80s, Plantu worked for the newspapers Phosphore and since 1991, has published a weekly page in L’Express. He has been awarded many prizes. In 1991, he was awarded the "Rare file Prize" at the Festival du Scoop d’Angers and both Yasser Arafat and Shimon Peres signed the cartoon. Plantu has maintained his interests and contacts in the Middle East.

After the fierce reactions to the publishing of cartoons of Prophet Mohammad in the Danish newspapers Jyllands-Posten in September 2005, Plantu, together with former UN Secretary-General Kofi Annan and several other colleagues, founded the association Cartooning for Peace, which gathers 125 cartoonists from around the world who with fight for freedom of expression with humour, which is a right guaranteed by the Article 19 of the Universal declaration on human rights.
Plantu talked to Mediacentar about attacks against cartoonists in Europe, the drawings of Prophet Mohammad, the freedom of expression in the Middle East and the importance of a cartoon in political criticism and the development of dialogue and understanding for Muslims in the western world.
How to you describe the fact that nowadays there are people who would hurt an artist or a journalist, for their work?
I think it is a result of the fact that we, 30 years ago, did not explain enough the way in which we should be leading a dialogue, enrich ourselves with it, exchange opinions and in that sense - live better. My luck is that for 40 years now I am all around the world, I go everywhere, and I have a lot of my friends who are Muslims from the Arab world.
When a decade ago it happened that a cartoonist from Denmark was attacked and when I saw he was in danger, I gathered my friends from around Europe and I told them what was happening, because it can happen to all of us. When it happened in Denmark, in Copenhagen, I had a lot of opportunities to travel around the world, I was in Tunisia, in the Middle East, I know a lot of people from the Arab world. I met my colleagues and they asked me what is happening with cartoonists, how they - as later Charlie Hebdo did - want to humiliate us, and I explained to them that it was no humiliation. Simply, I realized that as if we were speaking different languages and that what they considered to be offensive, for us it wasn't. Is tackling religious taboos the most criticized and the biggest pain of people who do not even want to understand what a cartoon represents?
It's not only that. There are other issues. The issue of poverty and the issue of lack of understanding of what is happening in Europe and other countries of the Western world, because in the East people think that the ones in the West don't know Muslims enough and that this was the reason why they are behaving with such a negative stand. For example, in France and Belgium there are ghettoes in which Muslims are isolated. Belgium did nothing to integrate them, they live very unhappily and one can look for reasons of this lack of understanding and hostility in there.
What are the most usual topics you tackled over the years - taboos, minorities or politics?
It is exactly what we started 10 years ago related to taboos, to make an organization I prepared together with Kofi Annan, the Cartooning for Peace. We often said that we have to talk about it and find a way to unlock certain problems. This is one of the drawings coming from the Netherlands (European with a head in the clouds) which in a way is saying for ten years that we have been talking to them, and that they are in the clouds. When I showed this cartoon in the Mediterranean, they said 'fine, this is something that suits you probably', but however here I see doubt, and for us in our world a doubt is not suitable, it does not exist, we do not accept it. For example, in Sudan, when I saw my colleagues working on some very sensitive topics which are very important - that is sexual harassment of little girls, which ends very badly, with tragic consequences - as far as the drawings are concerned, it is not to blame for all that, it is not its fault, it is not bad itself, nor dangerous. It only represents the expression of those ideas.
A cartoon is a specific form of freedom of expression and in the last several years it has been under pressure in Europe. How do you see Europe in sense of having strong voices which question reality and what is the difference between Europe and some other regions?
Europe is sleeping! It is sleeping because it did not make the effort of getting to know what is North Africa, what is the Middle East. If Europe itself doesn't accept the differences that exist, others will not know them either, and in that sense it is a danger for Europe. An example is one Austrian cartoonist who made a cartoon in which he showed Christ who surfs, to which the Orthodox Christian organization, the Greek Church, reacted. They sentenced him to two years and if he showed up in Greece, he would end up in jail.
An organization I made with Kofi Annan, which fights for the freedom of words and freedom of drawings, still has a lot to do. It is trying and working but there is a lot of fight left, because we think that if there are not enough connections between people and understanding of differences, there won't be freedom too. What is the general support of journalists and the media towards cartoons in France?
Oooh, haha. Are they helping? They are afraid and now they are very frightened to show some drawing expressing something. They prefer to take a photograph, which is neutral, such as Angela Merkel shaking hands with François Hollande or some piece of red carpet, then to show a church or a minaret or anything that could disturb someone.
The attack on Charlie Hebdo was one of the harshest attacks on freedom of expression, especially when we talk about cartoonists. How is it now, two years after?
As far as the drawings are concerned, and for me personally, it is the same as before. I am continuing the same. I still speak about human rights, rights of women, rights of children, and for me nothing has changed. What changed is my personal life. I made a drawing of Malala, the girl who went to school despite the Taliban who even shot her. I am not afraid to say it. I still think it is the basic right, that a girl goes to school. 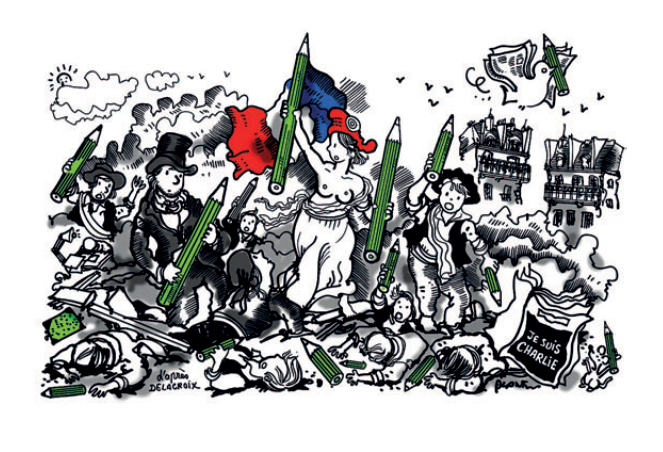 A lot of people here, who are not journalists who did not know about the satirical magazine Charlie Hebdo from Paris, after the terrible attack started discussing the freedom of speech. Do you agree that the freedom of expression is not freedom if it is limited?
I continued working as before and I agree that freedom has no limits. I continued criticizing intolerance and when they ask me in a Muslim society why I criticize Muslims, I say: no, I am not criticizing Muslims, I criticize one group of Muslims who are not tolerant.
I am focused on what is the essence of France, and that is freedom, brotherhood and equality and when we are talking about the brotherhood I am speaking to all my potential friends 10,000 kilometers away who will understand what am I saying and who will accept that this is a message and an offered hand for tolerance. For ten years now, since we established this organization of cartoonists, I have been meeting a lot of people. I met also those who said - so, now when the situation is like this, you have to draw something, and I said, I don't have to do anything, I will absolutely do what I did before, and that is to criticize everything which is not tolerance, everything which is not understanding among people and on that I am grounding my work and in that sense nothing changed.
Our organization Cartooning for Peace works both with Palestinians and Israelis and we really want to say that no one should be offending or humiliating each other. We only want to establish a dialogue and that people understand what is being said. Because if there is no understanding, then people think it is about humiliation.
A cartoon is like a “shot“ to people. How do people in already fragile societies - as the area of Israel and Palestine - react to cartoons?
I am trying to do real educational work over there and that is to establish contacts between the Israelis and Palestinians. This is how, for example, I met this cartoonist from Hamas who made cartoons which in Israel were considered anti-Semitic. However, she is speaking against the Israeli army and not against the Israeli people.
Our organization is comprised of people who are very different. We are not all friends, we do not agree on many issues, we do not have the same stands, but we want to have a dialogue, to meet each other, to convince each other, and together we can work.
Is it harder to be a cartoonist in a small society, to criticize your own environment, or to be a cartoonist in a big country like France?
An interesting question. Recently, I was in contact with a Syrian caricaturist who was tortured, he worked in Kuwait and when they discovered his origin and that he is making cartoons which will be against Kuwait, even though he had been doing that for years – as a Syrian he could not anymore. In France I criticize whoever I want and whatever I want. My papers criticize and they are leftist. I am leftist. Over there I can criticize whoever I want, but when I start criticizing the left... haha. Amongst other things, I must not criticize the union which manages the papers, never, it is a taboo. They are even above Mohammad. (laugh) Some of the drawings Plantu made during the war in Bosnia and Hercegovina. Thinking about Press Freedom
A Terrorist Manufactured by Secret Agents