Serbian tax authority targets independent local outlets, but not those linked with government 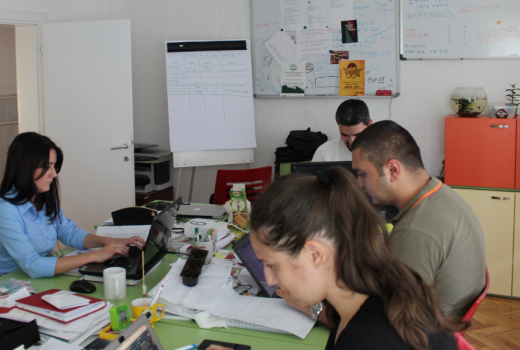 Serbian tax authority targets independent local outlets, but not those linked with government

Tax inspections are being used to put pressure on independent local media outlets, an investigation by the Center for Investigative Journalism of Serbia (CINS) has found.

When a tax inspector came to Južne vesti [independent online news outlet covering southern Serbia, based in the city of Niš] in November 2017, it seemed like that would be just another check-up of the outlet’s business. Between 2013 and November 2017, tax inspectors visited Južne vesti on three occasions, to check their business documentation and whether their computers had legal software. The visits always ended with the same outcome – no irregularities found.

However, the inspections that followed were different. The inspection initiated in 2017 never got its official epilogue, while in early February 2018 inspectors started a new check of the calculation and payment of taxes and contributions.

“The inspector asked that all the contracts we have with international organizations, such as the OSCE, the European Union and the like, be presented and then he took those documents and visited some of our business partners and waved [the papers] at them, presenting us as spies and foreign mercenaries,“ Južne vesti Director Vitomir Ognjanović recounted the encounters with the inspectors.

In his words, the business partners did not back out [of cooperation with Južne vesti], although some of them were scared.

Aleksandar Stankov, the daily’s deputy editor in chief, said that the staff the staff felt unsettled during the checks.

“We are a young office and this is the first time the first time any of us encountered something so serious. Even though no one has said anything to you as a journalist, you feel this pressure,” Stankov said.

Journalism organizations quickly reacted, and after them Prime Minister Ana Brnabić as well, who said that “if there is no indication that the tax check-up needs to be additionally expanded, then it should be completed as soon as possible.”

At that time, inspectors were checking nine years of business of Južne vesti, i.e. the work it had done since its founding. No other media outlet in Niš was checked for such a long period. For example, tax inspectors checked the Niška Televizija TV for a period of four years ahead of its privatization.

Not long after the prime minister’s reaction, in late April 2018 the Tax Administration wrapped up the check. Južne vesti was ordered to pay an alleged debt of a million dinars [approx. 8.500 €] because the former editor, Predrag Blagojević, had not been employed full-time. The inspectors cited the Catalogue of Jobs in Public Services and Other Public Sector Organizations as grounds for charging the sum, but it remained unclear how that document could be applied to a private media outlet.

The Ministry of Finance in the summer of 2018 issued a warning ahead of enforced collection, but no funds have been collected from the Južne vesti account to date.

Nemanja Nenadić of the Transparency Serbia organization told the Center for Investigative Journalism of Serbia (CINS) that checking nine years of business of Južne vesti was a good illustration of unjustified obstruction of media work. That is additionally confirmed by the fact that no irregularities were discovered, except in one case, where the law was obviously misinterpreted, said Nenadić.

Although government representatives denied that any pressure had been put on this media outlet and presented the entire inspection as regular, the minutes on performed tax inspections of media, which CINS analyzed, show the opposite.

In the Nišava District, which encompasses the city of Niš and six other municipalities, in the period from January 2012 to February 2018 besides Južne vesti checks were carried out at the Belle Amie, K::CN and Niška Televizija televisions, the former RTV Zona [radio and TV broadcaster], and the Narodne Novine newspaper. Južne vesti and K::CN TV were checked four times each, Belle Amie TV three times, while Narodne Novine had one tax inspection.

Inspectors visited RTV Zona once until 2013, when it ceased to exist. In 2014 its place was taken by the Zona Plus television, owned by Vladan Gašić, the son of Bratislav Gašić, director of the Security Information Agency. From its founding to the beginning of 2018 Zona Plus was not checked by tax inspectors.

Niška Televizija had a similar situation having been subject to inspection twice prior to privatization. In the 2015 privatization it was purchased by a consortium headed by Slađana Ostojić, the director and editor in chief of Gašić’s Zona Plus. From that moment to the beginning of 2018 tax inspectors did not check this television either.

“Any situation where it is noticeable that companies doing the same type of business and operating in the same area are checked to a varying extent and with varying frequency justifiably causes suspicion that the state does not treat everyone equally,” Nenadić explains.

Journalist Tamara Skrozza believes that any unequal treatment is in fact pressure on the media. In the case of Južne vesti, laws are applied selectively, while a strict approach is used only on those that are not to the current government’s liking.

She adds that it is not just about persistent multi-month inspections, but also open threats against media’s business partners.

“Just like in the case of Vranjske [weekly based in the southern city of Vranje], in parallel with inspections, simultaneous pressure is exerted from various sides, whereby people are exhausted, financially, mentally and health-wise – until they give up,” Skrozza explains.

The Tax Administration did not answer CINS journalists’ questions.

Tax officers checked Južne vesti and K::CN TV equally, i.e. four times each. However, the revenues of these two media outlets are not comparable. In a four-year period, the total revenue of Južne vesti, i.e. of its owner, the Simplicity company, totaled 114.7 million dinars [approx. 970.000 €]. During that time, the Kopernikus Cable Network, which broadcasts K::CN, posted revenue of over 1.9 billion dinars, i.e. 16 times higher [approx. 15.500.000 €].

Nearly all the checks were conducted in that period. Before that, in 2012, inspectors visited Belle Amie, while in 2013 they visited the former radio and TV broadcaster RTV Zona.

The owner of K::CN TV is Zvezdan Milovanović, the ruling Serbian Progressive Party commissioner for Niš and the brother of Srđan Milovanović, who in late 2018 bought two national free-to-air televisions – O2 and Prva.

Nenadić says that it is important that the Tax Administration inform the public about what objective criteria it used for checking certain Niš-based media, so as to eliminate any suspicion.

“The fact that Kopernikus’ turnover was 16 times higher than the turnover of the founder of Južne vesti does not mean the Tax Administration should have visited the founder of K::CN 16 times more. Both could have been subjected to the same number of checks. However, in that case it would have been reasonable to expect that other media, which are somewhere between these two in terms of financial strength, would be checked to the same extent,” says Nenadić.

Concern that tax inspections are being used to put pressure on “disobedient” media was also conveyed in the European Commission’s document on Serbia’s progress in chapters 23 and 24 in the negotiations with the European Union.

“I think we were meant to serve as a warning. So, if they could invent a fine for us, what will some smaller media outlet do if they are presented with a multimillion bill? It has nowhere to pay it from and it will shut down,” Vitomir Ognjanović pointed out.

Vukašin Obradović, the former owner of the Vranjske weekly, agrees.

“Institutional pressure on local media is much more effective than on the large media outlets, because even the fines that seem small are a noose around the neck,” Obradović told CINS.

The Vranje-based weekly was also subjected to pressure until it was shut down in September 2017, after several inspections. Obradović says problems started after the presidential election that year, because public companies stopped advertising in the weekly, most local officials stopped giving statements to the weekly, while funds from project-based media competition [managed by the Ministry of Culture and Information] shrunk considerably relative to previous years. At the peak of the pressure, in the period between August and September 2017, Vranjske was first checked by the Labor Inspectorate and then by the tax police. Even though, according to Obradović, the goal had been to find machinations, all they found were bookkeeping omissions.

“We received a decision whereby we were handed, altogether on various grounds, a 450,000 dinar fine [approx. 3.800 €]. There was no tax evasion, rather they found some irregularities, e.g. improperly filled out travel order forms and late payments,” Obradović explains.

Obradović made the decision to shut down the weekly because he saw no way out of the situation he had found himself in. He says he could have laid off the majority of employees, reduced the number of pages and turned the weekly from a proper print publication into mere décor. He didn’t want to do that.

“During the Milošević regime and in the years after his overthrow on 5 October 2000, we hoped the situation in the media space would change for the better. However, as the time passed, it turned out I was wrong. That lack of hope that a change might happen on the Serbian media scene in the near future is one of the main reasons for the shutdown of Vranjske.”

The Tax Administration has in several cases demonstrated a lack of willingness to provide data on media checks. The documentation CINS analyzed had been obtained by a Južne vesti journalist only after he had complained to the Commissioner for Information of Public Importance. A CINS journalist had requested minutes on the tax inspections of the most important national media, in line with the Law on Free Access to Information of Public Importance, but the tax authority rejected that request. The Commissioner is still in the process of deciding on the appeal against the decision.

Due to the reluctance of relevant institutions to provide documents and the Tax Administration’s refusal to answer questions, it cannot be determined whether similar practice also occurs in the cases of the most influential media.

Transparency Serbia unveiled the results of research on inspection oversight of the media in late 2018. Just like CINS and Južne vesti journalists, Transparency Serbia faced the Tax Administration’s refusal to submit information.

The article was republished with the permission of CINS and SEENPM.