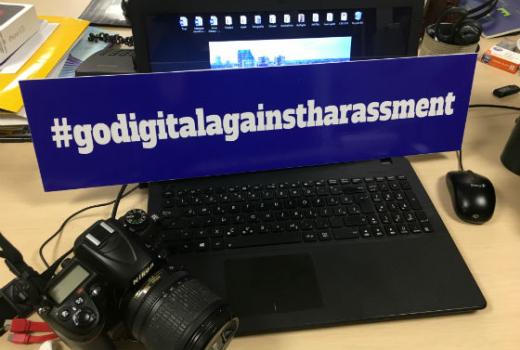 Journalists who critically write about the culture of impunity and nationalistic divisive rhetoric of political elites are, particularly under threat.

Numerous journalists in Bosnia and Herzegovina are still facing attacks and harassment on the Internet and particularly on social networks. These are mainly directed against journalists who write about ethnonationalism, political elites, and corruption. Journalists of the portal www.zurnal.info who write investigative stories on corruption have been receiving numerous threats lately, mainly through social networks. The portal www.tacno.net that publishes columns and opinion-pieces of intellectuals and journalists who write about, among other topics, denial of war crimes, impunity and glorification of war heroes for years have been under online attacks.

“Any text that we publish on our portal and that speaks critically of some issues in our society receives numerous bad comments and threats”, Štefica Galić, editor-in-chief of www.tacno.net  said. In 2016 Galić received numerous death threats on her Facebook page for criticizing the raising of the flag of the Croatian Community of Herceg-Bosna (HZBH), whose officials have been sentenced for war crimes by the International Criminal Tribunal for the former Yugoslavia (ICTY). “In the Prosecutors’ Office I reported some threats that I have received, but one year and a half have passed and they still have not contacted me”, Galić said.

Journalists who critically write about the culture of impunity and nationalistic divisive rhetoric of political elites are, particularly under threat. Journalist Dragan Bursać, a fierce critic of the culture of forgetting and denial of war crimes, was repeatedly verbally attacked and for a period of time was forced to leave Banja Luka. Last year he received death threats through online networks. One of them was for a text condemning the then announced Banja Luka support for Ratko Mladić, a former Serb general who was sentenced to life in prison by the ICTY for crimes against humanity and genocide. He received other threats for his text about the blockade of Bihać by the Army of Republika Srpska and the need for apology, responsibility and institutional conviction of those who are guilty of war crimes. He said that the police and the cyber-crime department of Republika Srpska’s Ministry of the Interior are doing their job, identifying IP addresses and persons, but when the cases pass to the Prosecutor’s Office, then everything stops.

Journalists face also offensive and discriminatory statements of politicians and other public figures. In 2016, a female journalist, Selma Učanbarlić, from the Centre for Investigative Reporting in Sarajevo, was exposed to hate speech, public online threats and abuse on the basis of her gender identity and due to her article on corruption in the healthcare sector in Sarajevo. Učanbarlić and Bursać believe that journalists should be vocal about these attacks. “Our only protection is complete publicity. As for numerous cyber hooligans and real hooligans, privacy is the protection, behind numerous nicknames and fake IP addresses, then our only salvation is to go public”, Dragan Bursać said.

Still, only a few are vocal about harassment and attacks that they receive and many decide to remain silent. One reason is the lack of legal protection mechanisms.

Despite receiving numerous offensive comments and threats, the blogger Srđan Puhalo from Banja Luka does not report them. One reason is that he believes that most of them are not serious, the other that reporting them would not bring any difference.