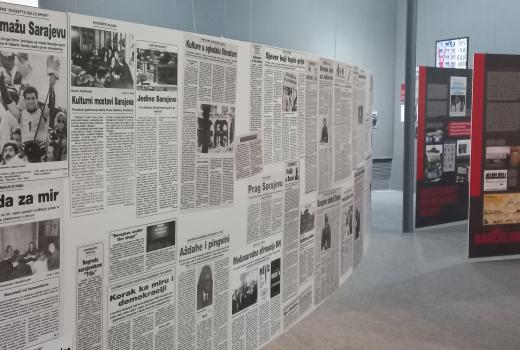 From daily reports and recording of events to the museum.

The photograph of the killed Nermin Divović is the most significant evidence of that crime. Seven-year-old Nermin was killed on 18 November 1994 in Sarajevo’s Zmaja od Bosne Street, during the war known as the Sniper Alley. Nermin’s mother Dženana was wounded in the stomach with one bullet. The bullet went through her body and hit her son in the head, killing him. 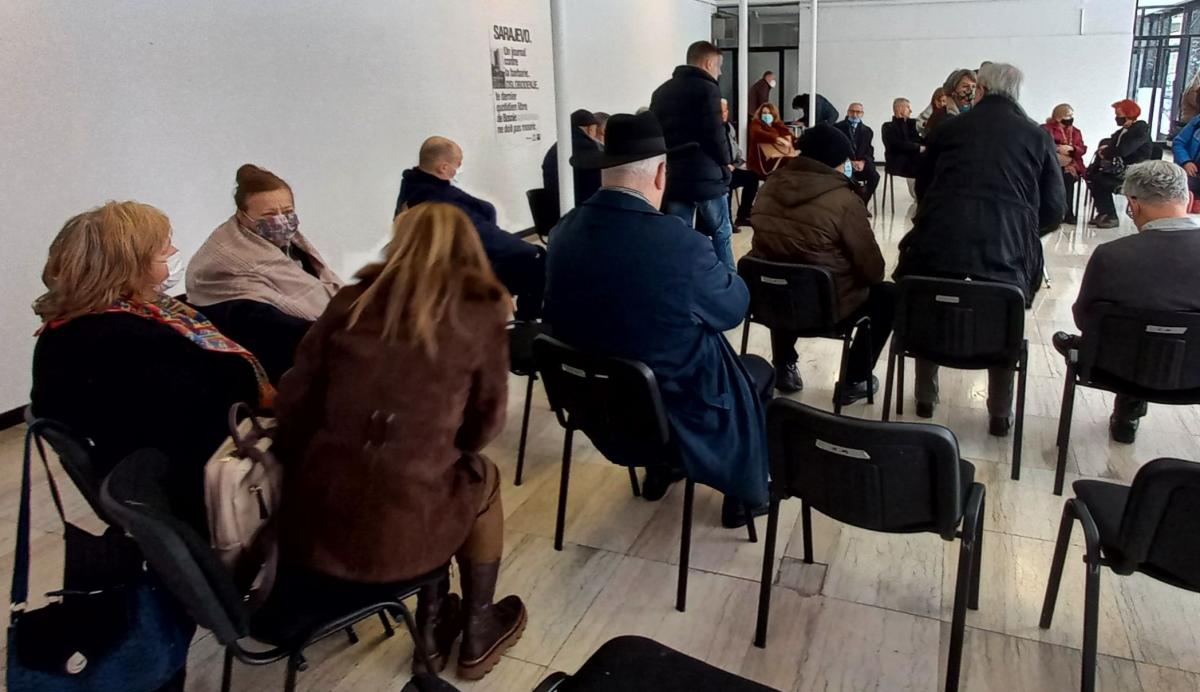 In the memories of the Sarajevo Oslobođenje journalist, Edina Kamenica, 18 November was a peaceful day. She was moving from the BiH National Museum towards the city centre. She remembers seeing a woman with two children and wondering ‘what kind of life do these children live’. And then she heard a shot.

“I turned around and saw a boy lying down. UNPROFOR moved its transporter and I headed in the opposite direction. I came home; everyone already knew that Nermin Divović was killed. I sat down, cried, took a deep breath and called the editorial office to dictate the text”, Edina Kamenica recalls. 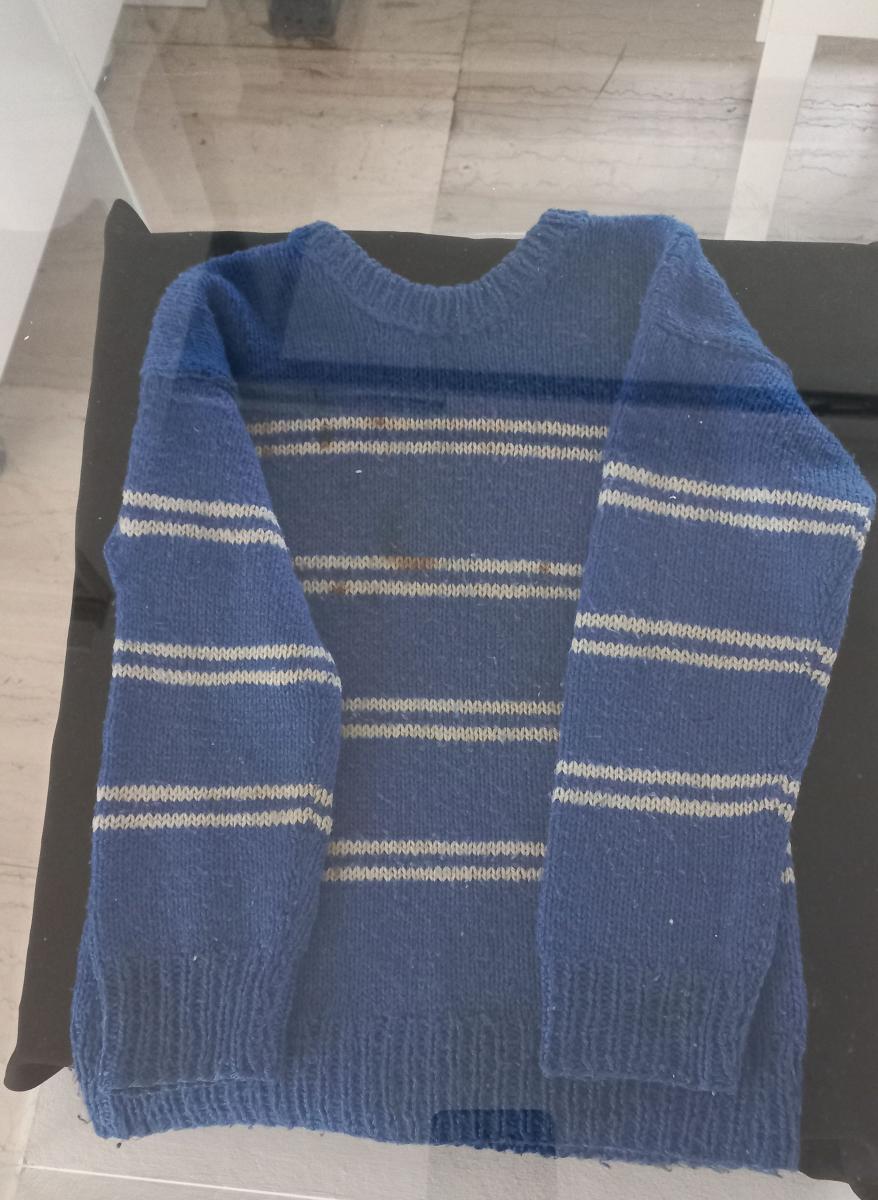 A blue sweater and a photograph of the body of a dead seven-year-old taken by Paul Lowe, who documented the dangers the residents encountered in Sniper Alley during the siege of Sarajevo, are part of the ‘Watch Out, Sniper’ exhibition at the History Museum of Bosnia and Herzegovina in Sarajevo.

The director of the History Museum of BiH, Elma Hašimbegović, says that the photo of Nermin placed in the museum and corroborated by historical facts has attracted much more public attention than it did in the days when it was taken.

“At the time it was taken, the photo had the role of informing, presenting the events of the moment, but today, 27 years later, we have a photo that is not unknown to the public, it is not something that people see for the first time. It created an echo in the museum’s exhibition space that we truly did not expect “, Elma Hašimbegović says.

After the opening of the ‘Watch Out, Sniper’ exhibition, a humanitarian action was launched to collect funds that will ensure a dignified life for Nermin’s mother, because she has been struggling to make ends meet for years. 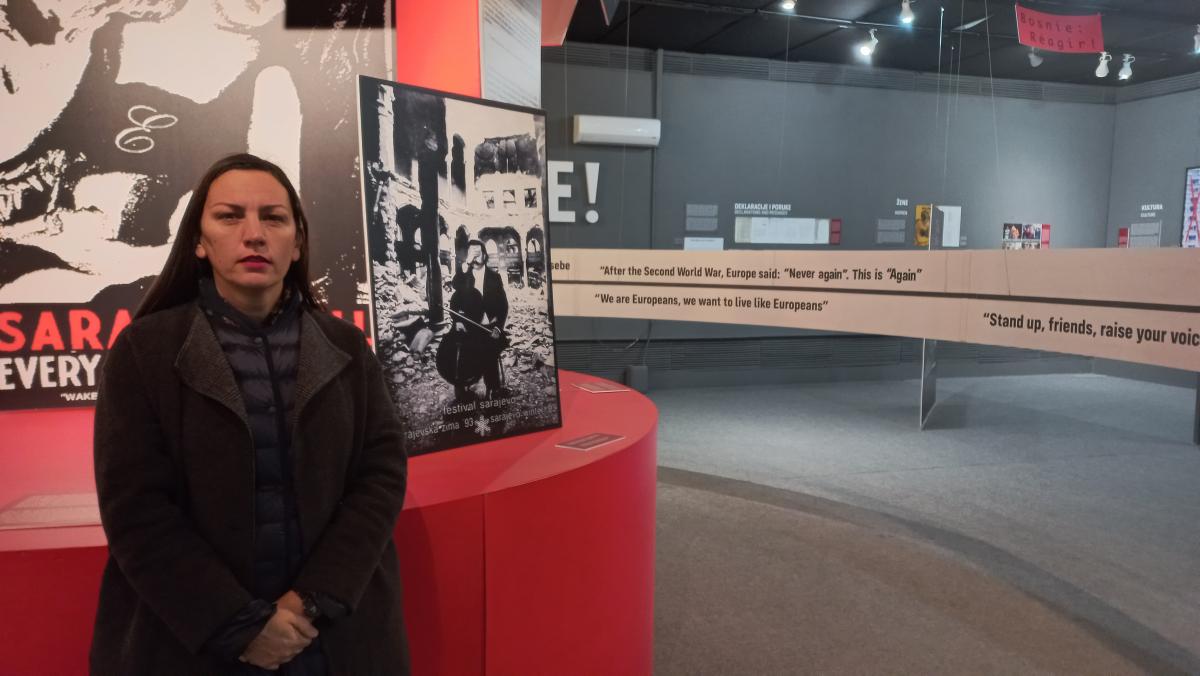 Elma Hašimbegović states that Paul Lowe’s photograph is an important historical exhibit, as it carries a personal stamp of a time.

“Unlike most international journalists and photographers, who sat for hours at crossroads waiting for a sniper to hit someone, the journalist who captured Nermin’s murder was not on duty at the time. He walked out of the Holiday Inn hotel, where international media stayed, and found himself on the spot. First, he passed by the family and the next moment he photographed the death of the boy “, she explains.
She states that it is interesting that he later found out that his colleague had photographed him and the boy Nermin playing in the snow a year earlier.
“The photograph contains all the elements that depict a period of time, it is a valuable museum exhibit. Unlike in the war reporting at the time, the photograph could not be published anywhere today, as it shows all the brutality of war.
However, I am convinced that it served as a catalyst for NATO forces to respond”, Elma Hašimbegović says, adding that journalistic reports and photographs collected during the war in BiH represent important historical material, as markers of events in a given time.
“Historical facts must be unequivocally true; we have not researched the truth of journalistic texts – they serve as markers – the first information about a certain event based on which investigations are initiated”, she explains. 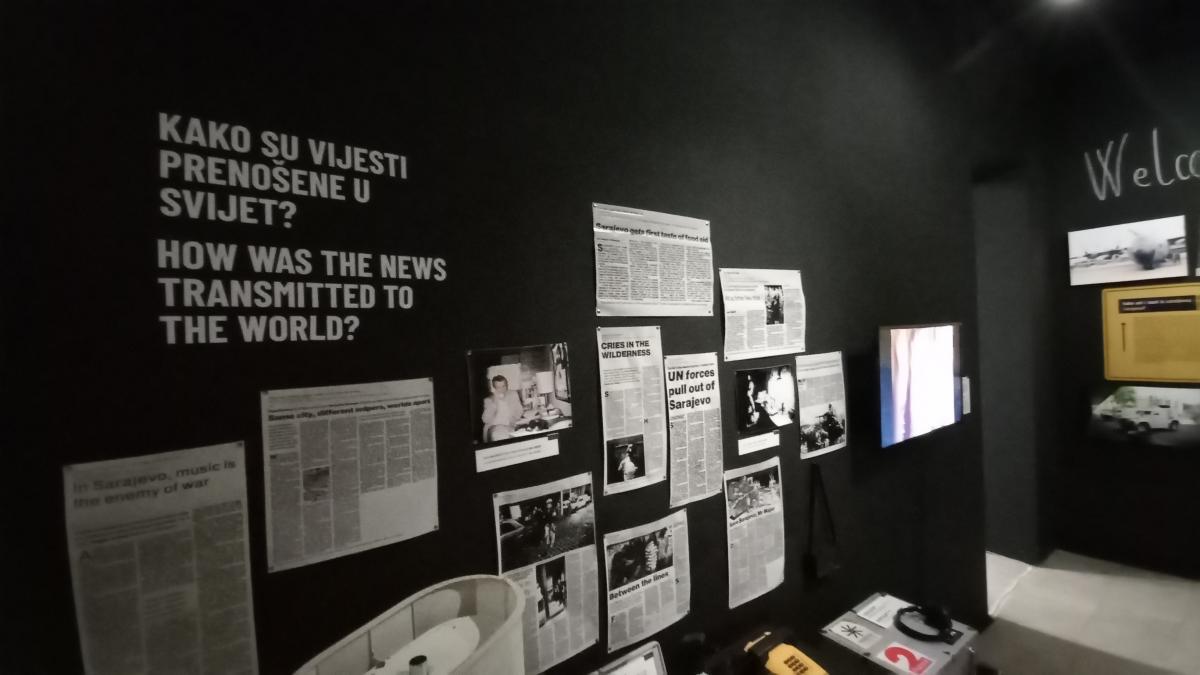 Since its establishment, the History Museum of BiH has been collecting, keeping and exhibiting newspaper articles and photographs.
“We keep such historical material, for instance, the first reprint edition of the daily newspaper Oslobođenje from 1946. We keep every edition, even wartime ones that are rare – their value is precisely in that,” Elma Hašimbegović says.
In addition to the ‘Watch Out, Sniper’ exhibition, ‘Live from Sarajevo: How Foreign Journalists Covered the Siege’ opened at the History Museum. The exhibition was preceded by a book by Kenneth Morrison, Professor of Modern Southeast European History at De Montfort University in the UK.
According to the research conducted for the book Reporting the Siege of Sarajevo, many foreign journalists, according to Professor Morrison, expressed frustration that their reports failed to do more to persuade the United States and the European Union to undertake greater efforts to stop the war.
“They believed that if they told the story well and pointed out the terrible injustices they witnessed every day, there would be military intervention. But as the war and siege dragged on, many of them developed a sense of discouragement that the crimes they documented had little impact on politics”, Professor Morrison said.
He believes that eyewitness reporting on events on the ground creates a basis for what historians or writers will later be able to build on.
“Often, daily stories are fragments, written immediately after the event and without insight into the past, without the broader context or good knowledge of the political or military developments. The role of journalists in creating this material is absolutely vital. Without their presence and their coverage, it would have been far more difficult to fully document what happened”, Professor Morrison said, adding that Sarajevo was covered almost daily during the summer of 1992 but then most foreign journalists except for John Burns of the New York Times and a group of Associated Press correspondents and photographers were evacuated from Sarajevo.
“Although it was extremely dangerous in the city, the reporting on the siege of Sarajevo was made possible by a satellite up-link created by the European Broadcasting Union in June 1992 and, to a lesser extent, the Holiday Inn, where some bureaus had satellite phones that allowed journalists to send their photographs and articles using quite sophisticated technology for that time”, Morrison said.
Without journalists, many things would have remained hidden
Unlike local journalists, who, fighting to save their own lives, did journalistic work on a daily basis, foreign journalists were able to access every part of the country and had the protection of international soldiers.
Arijana Saračević-Helać is one of the journalists who worked on the ground throughout the war. Her footage of the Markale massacre, where 68 people were killed and 144 wounded at a Sarajevo market on 5 February 1994, was transmitted around the world, but also served as evidence in war crimes trials.
“I was returning from another assignment when I heard the explosions. In shock, I collected parts of the human body, there was a human brain on my pants and that is the image that haunts me even today”, she recalls.
Then, with the TV crew, she took the wounded to the van of the Radio-Television of Bosnia and Herzegovina, and they drove them to the hospital.
“We filmed and helped people at the same time, we watched live how doctors do miracles and save people. The late Benjamin Filipović and Dževad Čolaković happened to be on the spot and filmed everything. All this was used before the International Criminal Tribunal for the former Yugoslavia, although we did not even know at the time that such a tribunal would be established”, Arijana Saračević-Helać says. 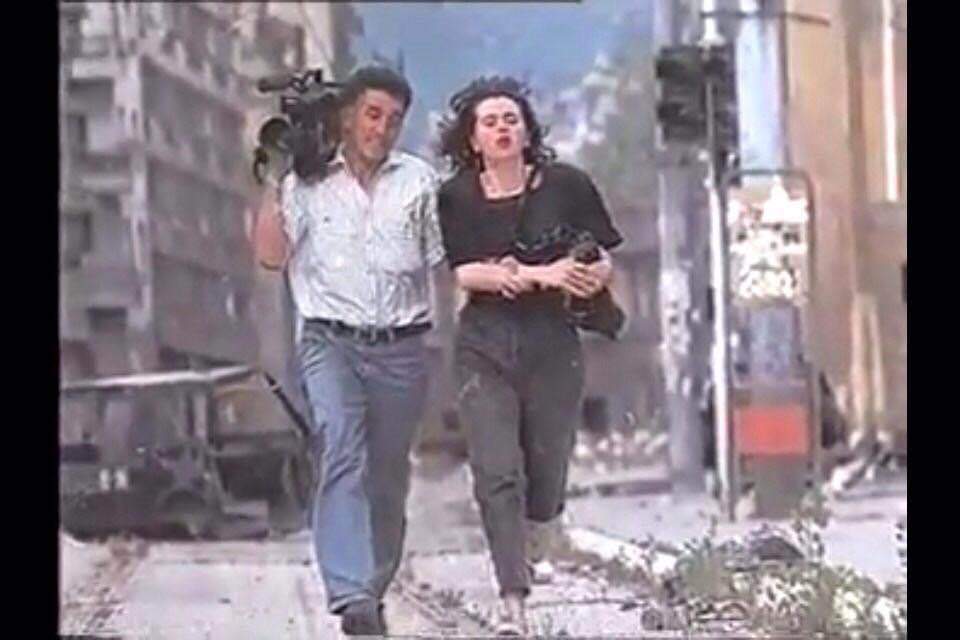 She believes that journalism, especially war and conflict reporting, is the first draft of history, because, as she says, journalists testify to what is happening on the ground and then historians research the facts. She adds that it was harder for local journalists in the war than for colleagues from international newsrooms who had the protection of foreign troops and were able to move.

Arijana Saračević-Helać states that journalism as a profession is greatly underestimated, but no one, as she claims, can dispute the fact that people are able to remember all the great events in recent history thanks to journalistic reports.
“If it weren’t for professional journalists in BiH, a country where nothing works, where politics has entered every pore of society, the public would never have found out about cases such as the one with ventilators”, she explains.
The tape stores memory just like Google
Professional journalism in the new media, social networks, that enable communication with the majority of the public, is a very important calling, according to retired journalist Milenko Voćkić, former editor of Radio Free Europe and war editor of BH Radio. 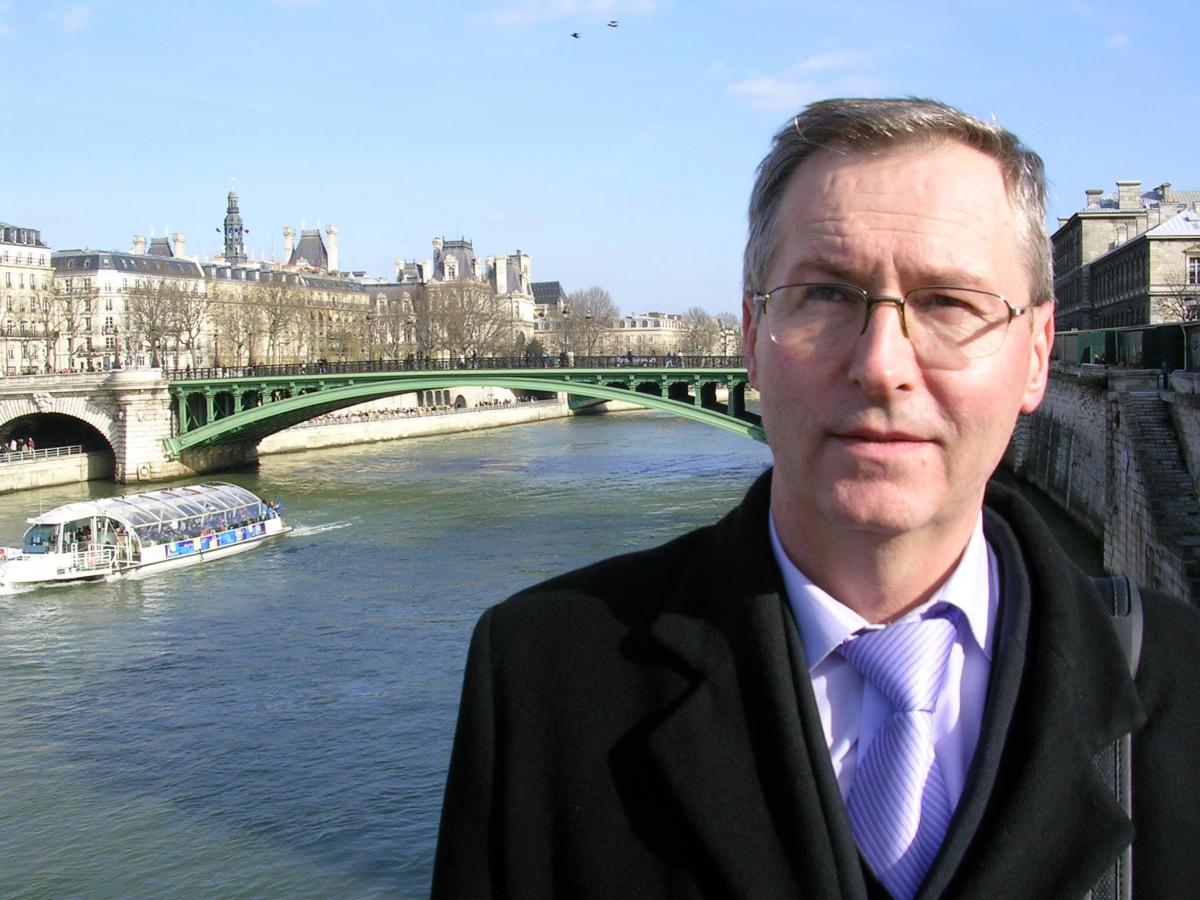 Milenko Voćkić remembers how his colleagues and he were completely unprepared for war, unaware of what was about to happen.

“We reported from the battlefield almost 24 hours a day. We had a live program with our correspondents joining via radio links. I remember, grenades were fired at Sarajevo that day, every minute it seemed. My colleague Enes Musabašić called from Grbavica. In his report, he described what he saw from the balcony, ‘the tanks on the left side of the stadium are facing the city…’ I was directing, listening to him, and I interrupted him to say ‘get your wife and children immediately and run from the apartment’. He asked me why? I told him that he revealed his position, all the calls were tapped then, and they, who we fought against, also listened to our programme”, Milenko Voćkić recalls.

He says that his colleague, fortunately, followed his advice, as the building was completely demolished a day later. On the other hand, Milenko Voćkić says that journalism is an important part of history, because journalistic articles, but also TV and radio recordings are artifacts of a time, testimonies that, as he says, are especially important in transition.
“Despite professionalism and the effort to objectively and truthfully convey to the public what is happening that day in the country, we did not have access to many sources, we did not have electricity, so we usually received information from foreign colleagues; there were also the others, who instead of for journalism opted for the war machinery, spreading lies, hatred and propaganda through microphones and cameras”, Milenko Voćkić says.
BiH journalist, writer and diplomat, editor of Sarajevo’s Oslobođenje and long-time correspondent from the Middle East, Zlatko Dizdarević, believes it is logical that the continuation of journalism is history.
“It’s something the world couldn’t do without. Journalism is an absolutely unavoidable fact of a social being”, Zlatko Dizdarević says.
In addition to often being part of various exhibitions, journalistic reports and photographs have been compiled into Bosnia and Herzegovina’s only digital newspaper archive, owned by Mediacentar’s Infobiro in Sarajevo. In the newspaper archive you can find newspaper editions that are more than 150 years old and it is of great importance for media professionals in the country and the region.