Who cares about natural resources? 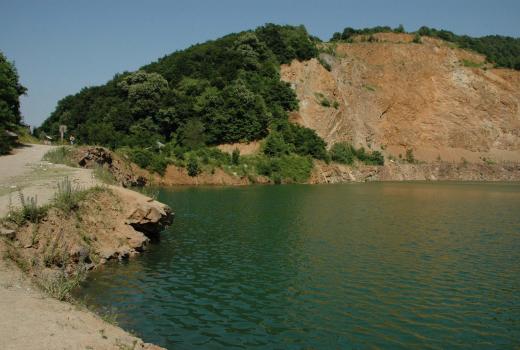 Who cares about natural resources?

Novi Sad – Recultivation of open pit surface or exploitation of rock in the national park? Is the main goal revitalisation of this area or a long term ore excavation? It is a dilemma for which institutions, ecological organisations, citizens of Stari Ledinci (a settlement near open pit mines) and the company which is a majority owner of these pits have been providing opposing arguments for years. And all because of different interests. The main obstacles are the quantity of trachyte that should be excavated from the mine pit (and recultivated), the path down which the rocks would be transported to the rock grinder at the Danube, the number of years for ˝rearranging˝ the open-pit surface– greening, reforestation and digging and excavating as much raw minerals form the national park as possible.

For the past couple of years, the majority owner of the Srebro (the Lake of Ledine) and Kišnjeva Glava open-pit mines, situated in the Fruska Gora National Park, called Alas Rakovac (which is a part of Austrian company Asamer) has been planning to built tourism and sports facilities, enlarge shore surface and provide the swimmers with a safe swimming area in the former lake, and all under the veil of recultivation. When they presented the recultivation of the Srebro open pit surface project, the representatives of this company avoided using the term trachyte exploatation, and used only the term recultivation of the area! On several occasions, the company´s officials denied the allegations by the citizens of Stari Ledinciand ecological organisations that they would excavate 18 million tonnes of rock (total supplies) from the Srebro open pit mine, and for the purpose of building the Horgoš-Požega highway or Corridor 10.

The Srebro open-pit mine recultivation project was developed by Slobodan Vujić, a professor at the Faculty of Mining and Geology in Belgrade, and his team. Vujić points out that this recultivation project will take at least 10 years and the plans have been made for buildings roads for transporting the rock to the Dunabe. The Ministry of Environmental Protection refused to support this project on several occasions, since conditions set by the Institute for Nature Conservation of Serbia, which created these national parks, have been violated. But a few days prior to the parliamentary elections in 2008, Saša Dragin, the Minister of Resources, gave his consent to this project and the Alas Company initiated the works. Though the team engaged in the recultivation project believed that it would last for 10 years, Dragin gave his consent to the plan for the Srebro open pit mine recultivation which states that rearrangement of this area must be completed prior to December 31, 2010 (in four years)!

Strongly prohibited exploitation!
The Institute for Nature Conservation of Serbia issued the prerequisites for living environment preservation for the purpose of developing the project that clearly states that the Srebro open pit mine falls under the II protection regime and any kind of raw materials is strongly prohibited. This area is also described as an international bird habitat - IBA (Important Bird Area) and ever since 2005, this has been an internationally significant botanic area of Central and Eastern Europe – IPA (Indigenous Protected Areas). According the opinion of the experts from the Institute, if the recultivation process does not fulfil these conditions, we should give up on it!

According to the Srebro open pit mine recultivation project designed by a team of experts, trucks carrying the trachyte would pass through Stari Ledinci, an inhabited place, every 15 minutes. They would not transport the trachyte in the afternoon, in the evening and during the weekends.

- Our idea with regards to the development of Kisnjeva and Srebro open mine pits recultivation project was to activate the existing cable cars in order to provide the alternative routes for the transportation of rocks. But this would cost a lot of money and it would not pay off in five years of recultivation – says professor Vujić. He adds that apart from the routes that run through the village, there are other paths down which rocks might be transported.

- According to our analysis, the exploitation does not jeopardise living environment and it generally does not represent a threat for it. After a technical recultivation, which should shape the lake and secure the area from avalanches, this recultivation will enable this area to serve it´s purpose. The second phase – biological recultivation - will follow this step. Vujić concludes that this project definitely supports the preservation of the Lake of Ledine, since its main goals are nature conservation, recreation, sports and education.

People of Ledine completely disagree with the idea of loaded trucks passing by their houses. They announced new protests and possible blocking of roads if this should happen.

- There is no way that we will allow heavily loaded trucks that weigh up to 45 and 50 tonnes to pass by our homes every 5 or 6 minutes. We will use all legal means to fight against the violation of the local population´s safety and health – says Vuk Šošić, the President of the ˝Stari Ledinci˝ Local Community.

Considering the fact that the preparatory works have almost been completed, local citizens express their fear of the possibility that heavy trucks start passing by since there no sign of the promised detour. Šošić points out that the City Transportation Authority´s decision states that the trucks over 5 tonnes of weight are not allowed to pass through their village.

The officials from Alas claim that they will fulfil their promise:

- Once again, I would like to point out that no transport through Stari Ledinci will be organised. We are curently considering alternatives, and the decision on the alternative road will be brought only after legal conditions and possibilities, the sensibility of the open pit mine area, technical possibilities for the transport and financial indicators are estimated. Recultivation will not be initiated before the issue of transport is solved – says Željko Dragović, a member of the Alas Rakovac company´s managing board.

Šošić points out that spring waters have been pouring into the Lake of Ledine for about 5 and 6 years, and it vanished from Fruška Gora within a month and a half. He openly says that the lake bottom will be covered by waste rock since that is the easiest and cheapest solution for them. So, it would not be a bad idea to measure the lake´s depth prior to the initiation of works.

Delić believes that recultivation has to be conducted, but not the kind Alas wishes to do! If they start bringing about their plan, only Alas and those who promised them all or nothing will lose.

- If they start bringing about their plan, everyone loses. The Fruska Gora loses, as well. I believe that the consequences will be far more severe. If the state takes this attitude in all similar situations, what is then the purpose of national parks? And, on top of everything, if we take a look at a government official´s statement that ˝natural resources of Vojvodina are at the disposal of construction works˝, everything becomes clear! – concludes Delić. Time for the Srebro open pit mine recultivation is running out. There are no alternative roads and the lake has disappeared. Flora and fauna of this part of the national park are also slowly disappearing. What could be the next step?