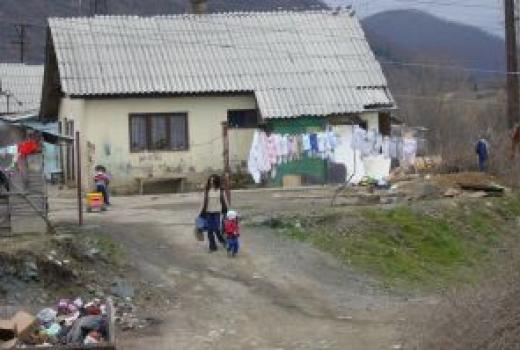 Hundreds of RAE (Roma, Ashkali and Egyptians) community members live for years in lead-polluted camps in Mitrovica, permanently life-threatened and in a legal vacuum.

We still face the problems of lead contamination of the Roma camps "Osterode" and "Cesmin Lug" in the northern part of Mitrovica, which in turn is causing a high number of sick people, especially children. Lead, which is found in Mitrovica is absorbed into the body through breathing, eating and even through the placenta in the womb. Lead poisoning can severely affect a child’s mental and physical development and at very high levels, it can also have fatal consequences. Lead-based paint and lead-contaminated dust (LCD) that are usually found in old buildings are the most common sources of lead poisoning in children. In the 2004 report provided by WHO, from Environmental Epidemiologist Gerry McWeeney it is also stated that lead poisoned children are in risk of encephalopathy and possible death.

According to the World Health Organization (WHO), the entire Mitrovica region was lead poisoned but the most vulnerable group of people, whom for ten years have been directly exposed to lead, is a group of displaced RAE (Roma, Ashkali and Egyptians) who live in the abovementioned camps. Dorit Nitzan one of the representatives of the WHO, warned the public that this is one of the most lead contaminated environments in Europe, because these people live only 300 meters away from the deposits of lead and other heavy metals, which have been accumulated here from the Trepca mine in a span of over 70 years.

During 2004, WHO sampled blood tests of 58 children aged 24 to 36 months that were living in the northern part of Mitrovica. Out of them 34 or 58.6%, resulted with a higher level of lead in their blood than the acceptable level of 10 micrograms (ug/dl) per deciliter set by WHO. Whereas 12 of them, living in Roma camps, had exceptionally high levels and 6 of them possibly fall within the range of 70 ug/dl, which according to the United States Agency for Toxic Substances and Disease Registry (ATSDR) are regarded as medical emergencies that require immediate treatment. Therefore, WHO recommended the municipal authorities in Mitrovica to immediately close these camps and move the inhabitants to safer environments, especially the pregnant women and children under 6 years old, given that the fetus and children are more prone to lead poisoning, based on the report of Gerry McWeeney, Environmental Epidemiologist and WHO Manager of the Healthy Environment Program. WHO then, advised the Institute of Public Health (IPH) in Mitrovica to complete another series of blood tests in children in the Roma camps, which were done in late 2008 and early 2009. The tests revealed that out of 172 tested children from both camps (age 0-16), 44 had over 45 ug/dl, and 15 had over 65 ug/dl. As the instruments used during testing could only measure up to 65 ug/dl, the exact levels of the latter are not known accurately. While citing the results of these tests Doctor Predrag Manojlovic from IPH emphasized that the Serbian Ministry of Health has set the upper limit to 45 ug/dl, while the WHO upper limit is 10 ug/dl.

Parents and various organizations and institutions have provided these results to highlight an emergency for immediate resettlement and treatment of the respondents. According to Dr. Manojlovic, they held various educational meetings for the RAE community. Nevertheless he is not familiar with the fact whether the children have actually undergone any treatment. On the other hand, Lulzim Morina from Mercy Corps International said that we can not rely on the results provided by WHO and IPH in Mitrovica, as they apparently are incorrect. In addition he said that they have conducted other analyses, but the results were not published, because according to him: “they are not for the public." We asked him whether there are children that are poisoned by lead, and are generally treated due to this condition, to which he replied: "they will be treated when they move out of the camps; there is no use to treat them as long as they are living in the contaminated environment.”

In an official report published by "UK Association of Gypsy Women," (February 2010) leading Toxicologist Professor Alistair Hay, UK Government advisor, said: „in all the years I have been looking at lead I have never encountered a situation where the condition is as catastrophic as it is for these children.“ In this report it is also claimed that so far there have been 77 deaths suspected to have occurred as a result of organ failure due to lead poisoning. When confronted with this statement the officials we spoke to (IHP, WHO, Caritas etc.) didn’t deny nor approve this but, we were told: “this is a very sensitive issue.”

Cesmin Lug IDP camp was established by the United Nations in January 2000, together with two other IDP camps in Zitkovac/Zhitkoc and Kablar/Kablare, to shelter Roma, Ashkali and Egyptian (RAE) Internally Displaced Persons (IDPs), primarily from Mitrovicë/a. Meanwhile Osterode IDP camp was established in March 2006, providing shelter for IDPs following the closing of two other camps in Zitkovac/Zhitkoc and Kablar/Kablare. Mercy Corps’ assessment conducted from October to December 2008 recorded that a total of 148 families, or approximately 623 people, were living in both camps, which are located in close proximity to the slag heap, considered one of the worst lead contamination sources in the region. The RAE community is exposed to this threat every day. Regarding the living units, Osterode provides a little bit better living conditions as many families live in brick buildings, while living in Cesmin Lug, the units are made out of wood panels, mud bricks, metal sheets and plastic.

In 2008 the UNHCR and its sister organization, UNMIK, abandoned the people on the camps and handed over their responsibilities to the Kosovar Government. WHO, the International Committee Red Cross (ICRC) and Human Rights Watch (HRW) have called for immediate evacuation and proper medical treatment for the people in these camps. But the fact remains that hundreds of RAE community members live in lead-polluted camps in Mitrovica, permanently life-threatened and in a legal vacuum.

Presently the European Union and USAID are financing the resettlement program. Mercy Corps is implementing this programme with two local NGOs – RADC (Roma Ashkali Documentation Centre) and KAAD (Kosovo Agency for Advocacy and Development). The main stakeholder is the Government of Kosovo and Mitrovicë/a Municipality and according to recent data, the Roma will soon be housed in newly built houses in the Roma Mahala, where they lived before the war. However, even if an immediate evacuation and resettlement is orchestrated, it will take up to 10 years of intensive medical treatment to get rid of the poison in their blood. Meanwhile, as many as 200 children are forgotten and abandoned by the UNHCR.