Any Content Not Based on Truth and Good Intentions Is Harmful 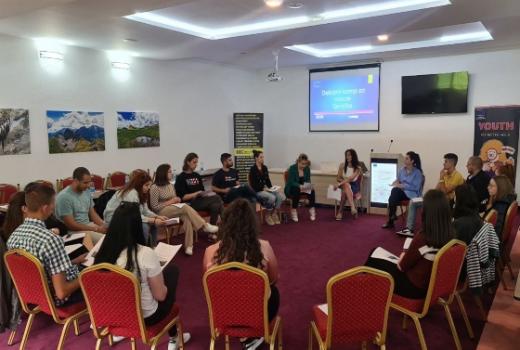 Any Content Not Based on Truth and Good Intentions Is Harmful

Selma Fukelj
31/05/2022
omladinski kampovi
Tjentište
Education on information and media literacy is key in the fight against harmful content online.
photo: Mediacentar
Young people come across harmful content on social networks every day, and disinformation, manipulative content and violence in the online space, in combination with insufficient control of social platforms, are especially concerning for them. Education on information and media literacy is key in the fight against harmful online content, according to the young people who participated in the three-day camp at Tjentište last week.
When speaking about the content she likes to read online, which includes economics, marketing and journalism topics, Mirnesa Agović, a student from Sarajevo, emphasises two dangers she encounters in the content she accesses.
“The first is the enormous amount of disinformation. You can’t believe the information you come across, you have to double-check to see if it is factual and accurate. The second problem is that children have access to social networks which have developed and lack any control or boundaries, so children look at content that is harmful to them. I feel sorry for children who have to see so much disturbing content,” says Mirnesa, adding that she has grown weary of social networks due to the COVID-19 pandemic that led to their increased usage in all segments of life.
Her sentiment of wanting to delete all her social media accounts is supported by a student from Kakanj, Mehmed Đokić, who says that young people are particularly prone to encountering the negative sides of the internet and harmful content, although the Internet also provides many benefits for users as well. He would delete his social media accounts because of hate speech, if he were subjected to it, because he would not be able to handle that, he says.
“One of the most negative sides to it is that content is very susceptible to manipulation and that various users can publish whatever content they want. This is also linked to insufficient control of content from social networks and people who are online for work or entertainment purposes encounter negative content instead,” Mehmed feels.

Education on harmful content on the Internet is extremely important, and camps where young people can learn more about it, such as the debate organized by Mediacentar Sarajevo, in which the people we spoke with also participated, provide just such an opportunity. According to Mehmed, many young people from different parts of Bosnia and Herzegovina came here with only one idea, and that is to educate themselves about the Internet, debate, and what they do not have the opportunity to learn about through the education system.
“I was positively surprised by the number of young people in BiH who think soundly and do not believe in divisions,” he says and emphasizes that it is very important that all young people stay united and talk about any topic.
Direkt portal journalist Milanka Babić Kovačević, who talked to young people at the camp about journalism, freedom in journalism and why this vocation is important, says that today it is a big problem that we, especially young people, have to distinguish from the sea of information what is true and to know what clickbait is, what fake news is, what is fake in all of this.
"My experience has shown that, in fact, this is perhaps most difficult to distinguish when you have some semi-information that has a grain of truth in it, which starts from some true information but is placed in a context that completely changes the connotation of the news. In the long run, this really has a huge damaging effect on society, and we live in a rather divided society. Not only does it not contribute to reconciliation and understanding, it delays it in the long run,” she said, adding that anything that is not based on truth and good intentions is harmful, and the most damage is caused by content that aims for nothing more than sensationalism and superficiality.
"In order to talk about some way of recovery and control, we have to start from education, not only of young people, which is very important and where the school must be included, but also the education of journalists. Insist on ethics. I think that ethics is the key thing for journalists", says Babić Kovačević.
Emina Šehić, a student from Zenica, agrees that the issue is that social networks are decreasingly used for good purposes such as communication and access to accurate information, and increasingly used as a negative source of information. She adds that, at one point, she deleted all her social media accounts because of cyber bullying. She also says that she always reports disturbing content or news that she considers bad to the platform where it was published because she believes that there is a possibility that the report will help somebody or protect her from a similar situation in the future.
When speaking about the content she follows on social networks, she says she follows what is going on the country, but if a piece of news particularly interests her, she seeks out more sources of information to determine if the information is valid. She also tries to steer clear of clickbait headlines and focuses on educational content that can contribute to her personal development, as well as the community in which she lives.
Online regulation is necessary considering the enormous amount of harmful content. This is addressed by the Digital Services Act (DSA) – a legislative initiative proposed by the European Commission, for which a political agreement was reached on 23rd April 2022 and which concerns the introduction of new rules to be applied throughout the EU in order to create a safer and more open digital space. This law aims to suppress illegal content, introduce accountability of algorithm platforms and improve content moderation. Babić Kovačević says that such a law is necessary because self-regulations has had no effect and now, we are in a situation where we don’t know what to do with this massive online space.
“Education of both sides – the consumers and those who produce information – is necessary. The problem today is that everybody is producing information. In this regulation setup, the truth is bound to be sacrificed to some extent and many innocent people are the victims of that. In principle, social networks are trying to regulate through certain mechanisms, but we can see that it’s not going very well”, the journalist says.
She also says that the ethical norms of professionalism in journalism have mostly been abandoned. In the race to be liked or have as many views as possible, i.e., to top the visibility scale, these norms have been placed in the background. This was clearly demonstrated by the media when the body of Matej Periš was found in Serbia.
“The tabloids hit rock bottom, and everybody says that this is what people want. Even if this were true, which I personally doubt, I think that journalism and journalists should not allow for such behaviour,” she concludes.
Nineteen young people from across Bosnia and Herzegovina participated in the three-day debate camp where, in addition to learning about debating, they also learned about the role of traditional media in shaping public awareness in BiH, with an emphasis on trends set by social networks and the types of content banned on social networks.
After Tešanj and Trebević, the camp was held at Tjentište, and Nermina Sadiković, project coordinator of Mediacentar Sarajevo, explained that the camp consisted of two parts – the first part was focused on lectures, practical exercises and discussion with a journalist, whereas the second part aimed to develop argumentation skills of young people so they can learn about the role of the media, disinformation and freedom of speech through debates.
The debate camps were organised as part of the project "Youth for Better Media" funded by the European Union, and jointly implemented by Mediacentar Sarajevo and Ja bih u EU.