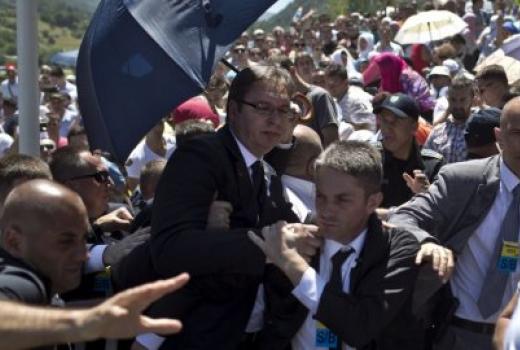 This text was first published on Eric Gordy's blog „East Ethnia“ and is republished here with author's permission.

So by now you all know the story of young Aleksandar Vučić’s first visit to Potočari. He made a few silent gestures, got kissed by a couple of mothers, and pinned a symbolic flower on his jacket. Then some people yelled at him and threw some stuff and he ran away, taking the dignity of the 136 murder victims whose remains were to be interred that day, and the grace of the people who tolerated his presence, with him.
I already told you I thought it was bad idea for him to go there without a legitimate purpose and with nothing to say. It was easy to predict that his visit would be a fiasco, but it took a unique combination of forces to turn it into an utter disaster. What were some of those forces?

As for the attack itself, there have been commenters who have tried to interpret it as a sign of failed reconciliation, or as an expression of outrage directed at Vučić. These kinds of observations require assuming that the bottle-throwing rulja were in some way spontaneous or representative. Eyewitness accounts (no links, sorry, I’m getting them by mail) suggest something else, that it was a small group of people organized and strategically placed with the purpose of creating a disruption. As for their representativeness and sincerity, you tell me who shouts “God is great” while throwing things and chasing a person away at a funeral. There is really no dilemma here: if you are opposed to violence, that includes violence against Vučić. But I’ll leave the summary of it to my colleague Srđan Puhalo:

Vučić himself responded in a statement after the incident with characteristic measured cluelessness, observing (correctly!) that “there are idiots everywhere.” Not so the other high ranking officials, who accurately noticed the opportunity to relive their abandoned Chetnicity. Duke Tomislav Nikolić took the opportunity to wave around a carefully coddled 1992-vintage grievance and to claims that the incident “clearly shows what some Bošnjak political and religious leaders think of Serbs as a people.” Foreign minister Ivica Dačić called the incident “an attack on the whole Serbian people.” Defence minister Bratislav Teleprompter called it “an assassination attempt.” And Vulin, well, never mind, Vulin is special. Meanwhile Politika was partying like it was 1999, or 1993, like Vojko and Savle had risen from their graves and electricity was on the hajj. The following day they ran two columns by Lazanski. Good times for the undead.

The followup was also dominated by the question of who carried out the attack? Of course the question has an obvious answer: an assemblage of violent fuckwits. But two theories got some media publicity. The first, and most widely dispersed, theory was first advanced by Vučić himself, that it was “a group of football fans from Serbia.” This was later elaborated a bit by labour minister Rasim Ljajić, who suggested that they may have been Novi Pazar fans. Not to be outdone in anything (except, perhaps, by Informer), Kurir set in motion a rumour that it was members of an elite Bosnian military unit specially trained in the deployment of shoes and water bottles. Like all media blame theories these ones represent, of course, attempts to draw out and control the narrative, while feeding fear of imaginary ethnic opponents. The contradiction here is that the more well organised the attack, and the more specific the identification of the organisers, the weaker the effort of people like Nikolić and Dačić (did I mention Milorad Dodik and Željka Cvijanović? What would be the point?) to blame an entire national group.

So what follows from this ugly and lamentable series of events? As Lily Lynch has kindly pointed out, Vučić has shown many times before how semitalented he is at stealing the show, transforming stories that matter to humans into travesties of egomaniacal publicity. Remember that time he jetted off to Feketić to interfere with the work of actual rescue crews so that he could pose for photos in which he would appear to be saving a child?
Well, now he has what he wanted: the attention of the media. How about using it for something worthwhile? His “hand of reconciliation” is not going to impress anybody as long as it is empty. And he has some things that he can put into it. Here are three:

Let’s put it this way: getting a rock in his head got Vučić a lot of good will. We can have different opinions about whether he deserved this good will or not. But we could have consensus on whether he used it for anything helpful.

Book about Srebrenica by Hasan Nuhanović