Shkodra floats on water during January 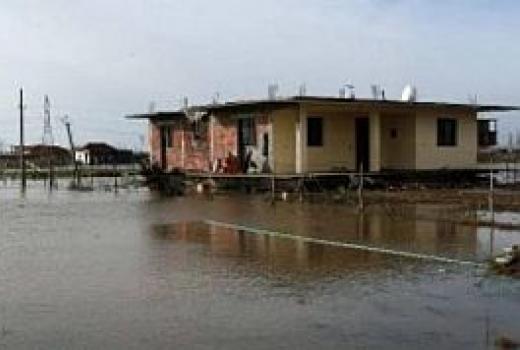 Shkodra floats on water during January

The consequences of the flooding that hit Shkodra, a city in the northern Albania, are catastrophic. No one living in this area remembers such a frightening flooding as the one this year.

Shkodra is a city located in the north part of Albania. Unlike other Albanian cities, it has very suitable conditions to become the county’s most important economic centre. It is located on a side of a big lake that is rich in fish and connected to the sea through the river of Buna as well as surrounded by fields, which to a common traveller would seem “pretty and productive ones”. It has been an area of trading routes coming from Kosovo, Central and South Albania, Macedonia and Bosnia, built not only as a administrative centre of a important province but initially as a trading and craftwork centre. Despite all of this, Shkodra is the only city that got flooded for the third time. On January 2nd, 2010 took place the last and the most devastating flooding.

The rage of river Drin

Soon as you step on the territory of Shkodra, you understand that “the rage” of the river Drin has seriously disturbed the old city. From a distance, looking at the Rozafa castle and the river of Drin nearby, you get the feeling of a battle without soldiers for saving Shkodra from the water. While approaching the city, on the area of Berdica, Bahcallak and Ajsma, your eyes can only spot water. It is pretty difficult to identify the road as well; on its sides the buildings are two meters under water. If you decide to climb up to the old Rozafa castle, you will find the view to the river Drin quite intimidating, just like in some movie scenes. The inhabitant areas are converted into islands and the plain fields of thousands of hectares are covered with water creating a big lake. Observing from the Shkodra castle, the Bahcallak area seems it is changing into an island where on its left are located the vast plains of Dajci, Trushi and Velipoja. It is difficult to comprehend the situation knowing that a week ago farmers were working on their lands and now water has covered everything and your eyes hardly catch soil but all you hear is engine running boats. This is the picture you are been offered until crossing the bridge of Bahcallak, expecting soon to find also the whole city under water. Shkodra is alike the biblical episode of flooding, except here you find cruising more than one lifesaving boat.

Nowadays, you can save the life of only 5 thousand inhabitants of Nenshkodra area. More than ten thousands of hectares are under water, approximately 2500 houses were damaged to extend that can’t be used as homes anymore and 5 thousand people have left all their belongings under water in order to save their life.

So far, these are the consequences of the biggest flooding that ever hit Shkodra. No one living one these areas ever remembers such a frightening flooding as the one this year. Although the inhabitants of Berdica are used to live with the water, the floating this year was catastrophic.

Nikolin Doda is one of those who in the evening of January 2nd had to leave everything behind so he could save the life of his children. On his 50s, he says that not only him but also his father does not remember experiencing such frightening flooding. Nikolin says: “We are used with the water, in fact Kiri swells these areas every year, but what happened this year was something unseen before. All happened suddenly and everything we could do was to get out from houses.”

In Shkodra, during usual days everything is normal. However, the citizens being aware of the water surrounding, have fear of the unexpected if a problem occurs with the dams. The conversations carried among citizens have one subject: The water.  In bars, streets and other places, all what people want to know from each other is how the situation is going. As soon as someone enters a bar, immediately he attracts the attention of everyone by saying: “the water is decreasing, there are no problems!” At the same moment you get the feeling that the people there start to breathe more freely, but after some minutes they go back questioning from the beginning: “Will the water rise again?”

This is the everyday anxiety the people of this historic city live with. They have their houses on sides of the river and the swelling of the riverbed would be catastrophic. Now that the inhabitants are facing the flooding they seem additionally confused since they are not used with the heavy presence of army and police forces as well as helicopter patrolling on low heights. Days ago, the panic caused people to purchase extra food expecting a bigger natural disaster. At the Buna Bridge, the water from the river came 30cm above the road. The water managed to come up the pillars of the bridge and fearfully progressed through the main city street. While people in the centre of the city were commenting the situation in the suburb, the water was approaching towards them as well. In the neighbourhoods near Buna and Drin have been flooded hundreds of houses. Meanwhile, ones remaining as most touched by the flooding are Dajci and Obot. Both of them are under water. While the people of Dajc are almost everyone evacuated, those from Obot still remain in the village, now transformed into an island. Mark Ndreu, inhabitant from Obot says: “I am going home with a boat. I know we are in danger but we must not leave houses and livestock behind. We fear that if we abandon the houses they will be robbed, so we have decided to stay”. Prek Ndola from Dajci says: “we stood and resisted for many days”.

The expert’s opinion regarding the situation in Shkodra

Luigj Pjetri, an expert on energetic says that the excess of the norms of Drin cascades is dangerous, therefore the opening of the ports of Fierz, Koman and Deja Vaut should be done in coordination and controlled. He stated: “The excess of the water has resulted from limiting its discharge in order of minimizing the consequences on the Nenshkodra area. As said before, these water discharges should be controlled and combined in order the water level of flooding in Shkodra to decrease, since there are limits, projects, regulations and fix quotes that we should stick on.  According to Pjetri, the role of the Ministry of Energetic and the Local Government should be in the direction of eliminating the danger from the snow fallings. He said: “There is a big amount of snow, which by melting can suddenly increase the water discharges. The initial plan of the government is deepening the sides of the river Drin and Buna with a purpose to evade flooding, meanwhile three Ministries of Environment from Albania, Italy and Montenegro are discussing about a future project, the realization of which will unable flooding.