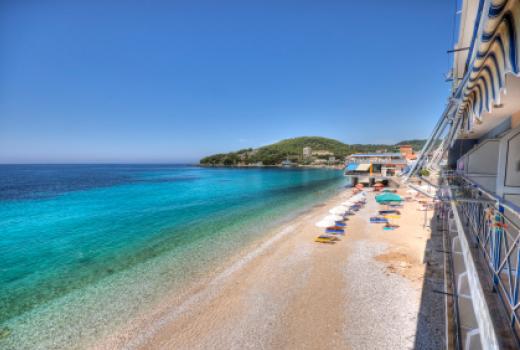 Albanian water resources are mainly used for power production, meanwhile the 450 km long coastal line on Adriatic and Jonian seas, is not conceived as the real opportunity for tourism.

Albania is a small country and even though it is reach in water resources, it could not use them for its own economic development. For about 20 years, Albanian water resources are mainly used for power production, meanwhile the coastal line, which is about 450 km long laying on both, Adriatic and Jonian seas, did not conceive as the good and real opportunity for providing investments in tourism.

Albanian coast is mainly characterized by informal buildings without rule and urban plans, even though the Jonian’s coast is evaluated as a natural pearl. The same situation characterize the area near the lake, even though the 7 lakes of Lura, or Ohrid Lake (Pogradec), represent other wonders of the nature and real opportunity for Albanian’s economic development and tourism.

Although it has a healthy environment, Albania is one of the few countries that suffer from the mismanagement of its treasury. In addition, the lack of investments too has negatively affected to transform the Albanian environment into a development of the economy.  Albania's Jonian Sea coastal area is known for its rugged natural beauty, with rocky highlands extending right to the edge of the beach. The beaches along the Adriatic coast are sandy, with shallow coastal water, which in some areas get mixed with sea rocks, creating wonder landscapes.  But, regardless the wonderful natural resources useful for tourism, they are highly affected negatively from economic activities, intensive migration of the population towards the sea side, rapid urbanization, many construction sites that are not assisted by the good infrastructure and the uncontrolled sewage.

The uncontrolled sewage and industrial water discharge, which end up into the sea, are a real threat for the sea water pollution, which can result critically for people’s health. There exists a Research center contracted by the Ministry of Environment for the quality monitoring of the sea water, but very few know about the results, which are meant to be made public. This year the monitoring has not been conducted or, in the best scenario, it has been partially completed.

According to Report of Environment Situation, 2008, 90% of the water of the seaside passes the norms allowed by the expert bodies such as WHO and UNEP. The most qualitative beaches, being evaluated by the quality of the sea water, are Dhermiu, Himara, Borsh, Velipoje and Shengjin. Within the recommended norms are the areas of Jonufri and Radhima. The water of Ohri lake have high quality and those of Shkodra and Butrinti have medium water quality. The beaches that are below the allowed water quality norms by WHO/UNEP are the Old Beach in Vlora, Prespa lake and the area close to Kavaja Rock, which altogether make the below limits 10% of sea and lake water.

The report monitors 71 pre-specified stations, 7 or 8 of which were below the WHO limits, especially about the microbiologic indicators. Health specialists recommend banning for tourists to go into the sea in those areas where the microbiologic pollution is higher and above the allowed limits. The norms of the water quality are set by the WHO, UNEP and MH for protection of public health, by putting warning signs or putting up surrounding fences.

In addition, the public is said to be informed too by written and spoken media. Regardless of the positive report, all these beaches actually have no warning signs, no fences around and no information given by media. The detailed information would help people take care of themselves, and most importantly make the government take serious steps in develop a strategy to manage the wastes and the sewage. Becoming aware of that situation, the government, local authorities, in cooperation with the World Bank, and other donor agencies/countries are implementing projects for construction of treatment plant for sewage waters.

The construction of sewage canalization, their discharge to the main collector and sending to the cleaning plant, make up the main goal of the 11 projects, the value of which reaches 111 million Euros. There are 3 treatment plants (Durres, Lezhe- Shengjin, Saranda) completed during 2008-2009 and the others are on the process. All of them are built in the coastal area and close to the lakes. But, despite of this, still it is not known when the treatment plans will be completed and when Albania will stop to discharge polluted waters in seas, rivers and lakes.

A big problem is pollution from urban waste, coming from urban areas and rivers, which pass through big cites and bring solid waste into the sea. Surface waters and seaside is aesthetically unacceptable and harmful to people’s health.

According to Ministry of Environment, the situation is unacceptable in tourist area. There are solid wastes during the coast line of Lalzi and the same is in the other areas in north and in the center of the country. During the Rodoni’s coast line, there are amounts of urban waste, brought by the Ishem River.They reduced gradually in the direction of the Ishem river discharge Cape Rodon. These residues are generated of waves on the sand, in about 120 m width.

Tourists do not go there anymore and fishermen do exercises their crafts in the near by water. “In this situation people need to go deeper into the sea to go fishing. This could be dangerous to us and the catch is tiny. This place used to be a tourist attraction. It used to be visited by local tourists from Durres, Tirana, etc., but, because of the pollution, none visits this place now”, a fisherman said. The pollution comes mainly from Albania’s capital, Tirana, and surrounding towns which use their small rivers as garbage disposal.

A serious problem is the construction site’s waste materials. All of them are disposed in sea side, polluting the environment. The situation is the same in Vlora and in almost all of the city’s coast line. All the areas that need immediate regulation by the authorities are already specified.

“Urgent measures to clean up tourist areas from dirt and urban waste”, ordered Albania’s Prime Minister, Sali Berisha. “This is an emergency action; not only a clean up, but an educational one”, Taulant Bino, deputy-minister of Environment said.

Because of the wastage situation should not be only connected with the local government or municipalities, one of the important factors for having clean beaches is the education of people. Most of the polluted areas are created by the daily tourists or the local inhabitants. “Keeping clean our living places must be a self initiative. If we all are responsible that we do our job well, and then we should ask the government to provide us more and force them to make it happen”, complains a 55 year old tourist in the public beach in Durres, the biggest and the most crowded one in Albania.

The Ministry pressures the municipalities to take immediate action for protection of the environment. The municipalities complain that they have taken so many actions lately for cleaning of the beach. “Municipality has started the beach cleaning from any type of pollution. After that, we will work on the sand and disinfect it from bacteria and insects”, declared Vangjush Dako, major of Durres. But, obviously, this is not enough. The Prime Minister declares; “we don’t stay and argue all the time, altogether we need to mobilize and clean all the areas”.

According to the law, central and local government, individuals and institutions, have the duty to protect the environment from pollution, but no one enforces this. “Albania has good environmental laws, but does not enforce them”, lately international relations said.